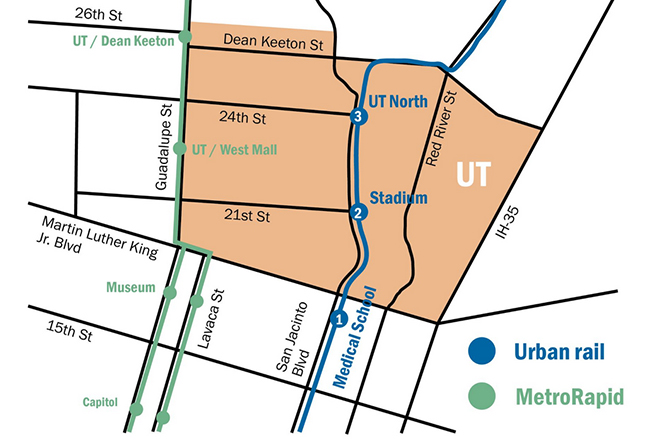 With both Capital Metro and Austin City Council endorsing Project Connect’s recommended route for urban rail, the council is expected to discuss bond language in August for the $1.38 billion project connecting East Riverside to ACC Highland.

If Austin residents approve a bond proposal in November, a three-year environmental assessment and engineering process will determine how to safely construct the rail, the bridge across Lady Bird Lake and the possible tunnel through North Austin.

The urban rail proposal is a part of Project Connect, a collaborative vision for Austin’s transportation system between the city, Cap Metro and other Central Texas planning organizations. The approved route will run along Trinity Street through downtown and travel on San Jacinto Boulevard through the UT campus. Three of the rail’s proposed stops are on campus at the future site of the Dell Medical School, Darrell K Royal-Texas Memorial Stadium and on the northeast side of campus.

While some have complained about a lack of public engagement in the planning process, Mayor Lee Leffingwell said Project Connect and Capital Metro have hosted more than 200 public meetings to relay information about the rail and hear from the community.

“I believe that this has been one of the most open, transparent and inclusive processes I’ve ever seen,” Leffingwell said.

City council decided to limit public discussion to 30 minutes for both sides before they voted on June 26, excluding several in attendance that hoped to address the council. Among them was Jamie Nalley, an architectural engineering senior and Student Government representative.

“Students are a highly transit-dependent population,” Nalley wrote in his prepared speech, given to the Texan. “This current plan fails to take us into account.”

The Student Government assembly has passed resolutions in recent years calling for an urban rail alignment along Guadalupe Street and Lamar Boulevard instead of the recommended alignment on the east side of campus.

The route on San Jacinto is incorporated into the University’s 2012 Campus Master Plan and was recommended to Project Connect by University officials.

A light rail on Guadalupe and Lamar was proposed in 2000 and lost a bond election by a narrow margin. The city later pursued bus rapid transit along those streets, and the Federal Transportation Administration awarded Austin $38 million in 2012 for the MetroRapid service, which began running in January.

“It would be near impossible to justify additional FTA funding for this corridor so soon,” Leffingwell said.

The city will seek FTA funds to cover half of the project’s cost, with the remaining portion locally funded. The city has set aside $600 million for urban rail, leaving $100 million unfunded.

Mike McHone, who represents businesses, churches and residential communities near UT on behalf of University Area Partners, said he feels the city has placed MetroRapid where urban rail should be.

“We’ve been given buses instead of light rail. We never thought buses were the right way to go, but we got them,” McHone said. “So we’re going to compound a mistake?”

Thomas Butler, transportation director for the Downtown Austin Alliance, an organization with the goal of improving downtown Austin, said the route is designed for what the city will look like a decade from now. Butler said it will serve a population growing to the east, as well as the future ACC Highland campus, the Dell Medical School and an innovation zone for technology development expected to flourish in the northeast corner of downtown.

Butler emphasized the route’s connectivity to the larger transportation system, including the rapid bus lines and MetroRail. Robert Svoboda, co-director of the Student Government city relations agency, said his main concern was that Project Connect failed to seek input from the student population.

“The plan approved is not perfect, but it’s a step toward more options for transportation and all students want that,” Svoboda said. “It’s been a hands-off relationship with city government, and we want to change that. Our goal is to educate students so they can vote.”

Correction: This story has been edited with the correct source of the $600 million funding for the project. It is coming from the city's strategic mobility plan and not the Central Texas Regional Mobility fund.