U.S. should use caution in current Iraq crisis 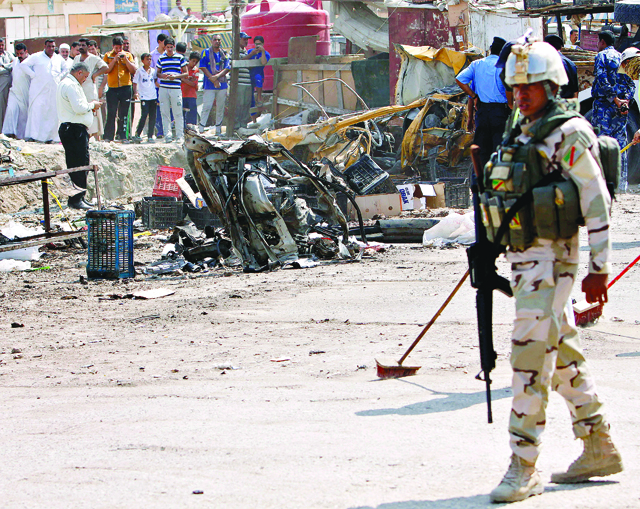 An Iraqi soldier stands guard as security forces inspect the scene of a car bomb attack in Basra, 340 miles southeast of Baghdad Sunday.

In March 2003, the United States invaded Iraq, beginning a bloody and controversial war that lasted until late 2011. The Iraq War took the lives of 4,500 U.S. soldiers and wounded tens of thousands more, in addition to costing American taxpayers at least a trillion dollars. It was the defining political crisis of the first decade of the 21st century, permanently destroying the credibility of the George W. Bush administration and leading to the election of Barack Obama, whose longtime opposition to the war helped him defeat Hillary Clinton for the 2008 Democratic presidential nomination. In recent weeks, Americans have again heard unsettling news reports from Iraq. The Islamic State of Iraq and Syria (ISIS) has brutally seized control of parts of the country and threatens to overthrow the entire government. As worrisome as this development is, the United States should be cautious in its response.  Another war in Iraq would have serious consequences for our country, especially for our soldiers and veterans here at UT.

In the lead-up to the initial invasion, Bush argued that Iraqi dictator Saddam Hussein harbored weapons of mass destruction and posed a threat to the safety of the United States.  For Bush, removing Hussein from power and establishing a democracy in Iraq became critical goals in the War on Terror employed by the United States following the 9-11 attacks. Most Americans initially supported the U.S. invasion, although a vocal minority warned of the difficulty of building a new government and that Iraq could disintegrate into warring factions. U.S. forces quickly toppled Hussein, but American public opinion turned against the war when Bush’s claims of weapons of mass destruction proved baseless and the occupation of Iraq devolved into a quagmire that lasted years. Finally, after spending great amounts of blood and treasure to help Iraqis build a stable government and combat terrorism, American forces withdrew from the country in late 2011.

Now ISIS is threatening to conquer Iraq. This dangerous prospect results from the failed political leadership of Prime Minister Nouri al-Maliki, a Shia who has refused to bring Sunni Muslims into his government. ISIS consists of Sunni militants in both Iraq and Syria determined to establish a caliphate, or Islamic state, in the region. ISIS has taken control of parts of Iraq and viciously executed American-trained Iraqi soldiers. Obama recently sent approximately 300 military advisers to Iraq to aid its military and evacuate Americans from the Baghdad embassy, if needed. However, Obama has vowed not to send combat forces into Iraq at this point.

The president’s cautious response to the crisis has been commendable, but the United States must avoid becoming trapped in another dangerous war in the Middle East. It is true that terrorism continues to threaten the safety of Americans, both at home and abroad. We have seen this in Austin. Recently, a UT student and his friend were charged with and pleaded guilty to supporting terrorism. The conquest of Iraq by ISIS would bring immense instability to the region, and the last thing this country needs is to become engaged in another costly war. Adam Wagner, President of the UT Student Veteran Association, served three tours of duty in Iraq and Afghanistan. Wagner believes that the United States cannot intervene every time there is a crisis in the country. “We fulfilled our obligations. We should urge the Iraqi Army to take advantage of the skills we taught them. It is up to them.” Wagner maintains that the immense sacrifices paid by American soldiers were worth providing the Iraqi people with freedom they had never experienced. “I strongly believe we did our job.” However, he argues that ultimately the Iraqi people must decide for themselves what type of government they wish to have. The United States has endured over a decade of war since the terrorist attacks on 9-11. Our soldiers have sacrificed endlessly, and many bear terrible injuries that will be with them throughout their lives. American military forces deserve the chance to return to civilian life. The American public is extremely war weary. Polls show that Americans of all political persuasions have no desire to support another war. Those few politicians who pressure the president to use more force in Iraq are the same individuals who relied on flawed information to lead us into war in 2003, such as former Vice President Dick Cheney.

Besides the conflict in Iraq, other problems around the globe persist that require U.S. attention. For months, Russia and Ukraine have remained in a tense standoff.  Russian separatists in eastern Ukraine have brought violence to the country with the tacit support of President Vladimir Putin. Recently, Malaysia Airlines Flight 17 was shot down over Ukraine, killing all 298 passengers. Although investigations into the incident continue, evidence suggests Russian rebels perpetrated the tragedy, mistaking the airline for a military plane. The Middle East region has also witnessed renewed problems between Israel and Palestinians in the Gaza Strip. Following the firing of rockets into Israel by Hamas, Israeli forces responded in kind.

The United States faces numerous problems at home and abroad. Although our country is indeed the most powerful nation in the world and it must protect its international interests, the U.S. cannot intervene every time a crisis plagues the Middle East, as Wagner reminds us. These countries must determine their own destinies, and American interference can cause further problems for all nations involved.  Our complicated history in Iraq over the past decade makes this fact abundantly clear.