The chancellor who didn’t come to the regents’ dinner party 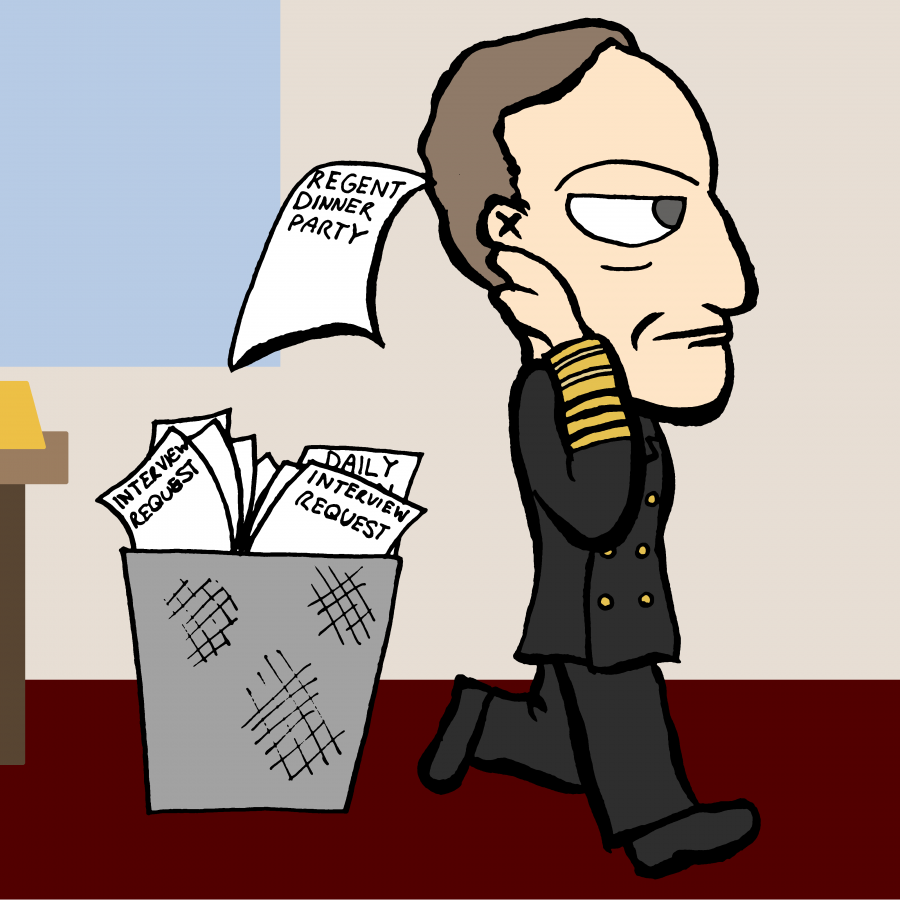 He didn't come to the dinner party.

That much we knew from the documents.

On Tuesday evening, the UT System Board of Regents confirmed Admiral William H. McRaven, commander of U.S. Special Operations Command, as the sole finalist for the position of UT System chancellor. Under state law, McRaven will have to wait at least 21 days, in this case until the regents' August meeting, to be officially appointed. McRaven is best known for leading the 2011 operation that took down Osama bin Laden and, more recently, for a rousing commencement address at UT last semester.

The decision didn't come as a surprise. News outlets across the state had been reporting the likely selection for days, many with clear signs of boredom and exhaustion.

However, back in May, the information about McRaven, which admittedly came by way of a leak, was much less available. When the Texan filed an open records request with the System for any and all documents regarding the admiral, it turned up nothing.

Nothing except a few water-cooler emails, one of which included the idea by Regent Gene Powell, approved by Chairman Paul Foster, to invite McRaven to a dinner party hosted by the regents and System staff at the Bauer House, the chancellor's official residence in West Austin.

Luckily for him, the regents didn't mind.

Not so luckily for us, we still don't know how they made up their minds.

Since current Chancellor Francisco Cigarroa announced his resignation in February, the board has never once openly discussed his replacement, except to announce the hiring of an executive search firm to assist it. As evidenced by our meager haul from the May open records request, the regents know better than to put important information in a requestable format.

While we can't see that the regents have done anything illegal in this case, this sort of secrecy is all too common within the System, not just in the search for a new chancellor, but in its more general operations. Early this month, it was only through a leak to Breitbart Texas and several other outlets that the news of President William Powers Jr.’s potential firing became public. Powers was ultimately “spared” in the sense that Cigarroa accepted his offer to resign next June. And the ongoing drama between Powers and Cigarroa (as well as interloper Wallace Hall) has unfolded largely behind closed doors.

However, the chancellor is no pencil pusher. As the leader of the 15-campus University of Texas System, he or she serves as the face of a group of universities and health institutions with an operating budget of $14.6 billion. With such a great level of responsibility, the University community and taxpayers deserve more transparency in the selection process.

Unfortunately, the current regents do not seem likely to grant us that basic right. After all, if they exposed all the forces at play in their decisions, the already aggravated tensions between them and the public would likely be strained to the breaking point.

We don't necessarily dislike the regents' choice of McRaven, but we can't fully support a decision whose underpinnings we don't understand.

McRaven seems to have the near-universal support of the UT community, and although he is not an academic, the military has produced such great academic leaders as James Earl Rudder, former president of A&M and the A&M University System. Similarly, Robert Gates, not a military man but a former Secretary of Defense and director of the CIA, also served as president of A&M.

Thus it remains to be seen how McRaven will perform. He seems to have all the tools at his disposal to succeed, but until the regents and System lift the shroud of secrecy from his appointment, we cannot throw our full support behind it.