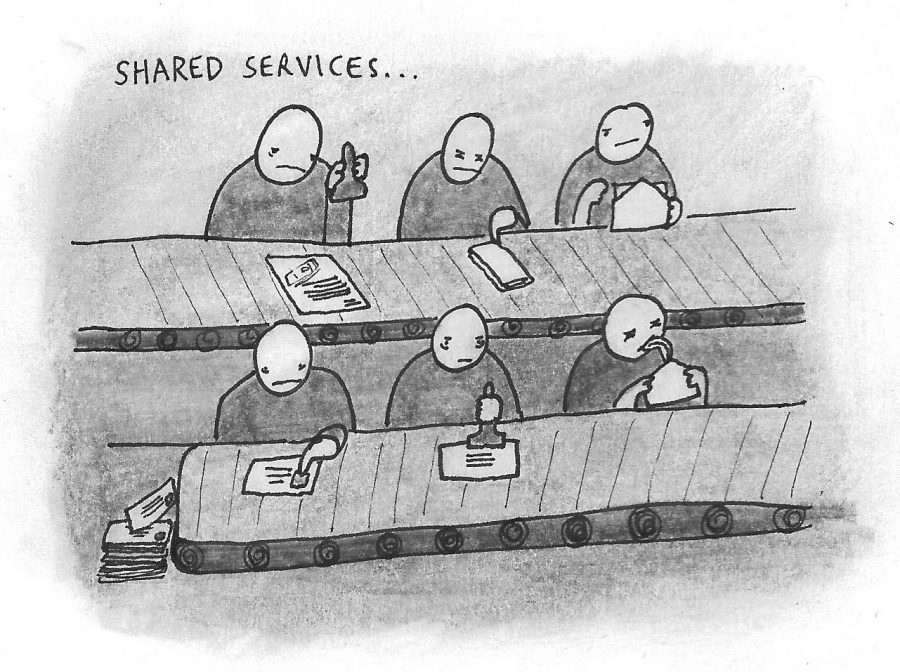 Spend any time with your ear to the ground on campus, and you will be sure to hear some griping about Shared Services. The dispute, at its core, revolves around cost-cutting measures currently employed by the University on a pilot basis to weed out redundancies in the system.

This much sounds noncontroversial, but the devil lies in the details, as always. The aforementioned “redundancies” are more than just numbers on an expense sheet — they are people’s jobs. More than 500 jobs could be slashed as a result of this new Shared Services plan, namely in finance, human resources, procurement and information technology. The plan would focus on strenuously consolidating administrative positions into fewer offices. Once again, perhaps on paper this looks like a no-brainer, but faculty and staff have expressed grave concerns with the effectiveness of fewer administrators providing support for such a wide assortment of services. Indeed, “sharing” the services may force many to bite off more than they can chew.

Another concern is the consulting firm Accenture, with its notorious mismanagement of aspects of the state’s food stamp and Medicaid programs, representation on the committee that recommended changes to the University and pricey bill for implementation. With all these problems, the plan presented looks to have more holes in it than a piece of Swiss cheese.

Student and faculty support has been almost completely one-sided. For all except the especially zealous libertarian faction on campus, no one wants to see hundreds of job losses, especially when coupled with possibly inferior services. Some parts of the campus community have even mobilized completely against it. In late April, a protest was held in front of the Tower, followed by a sit-in at the office of UT President William Powers Jr.

Considering the major leadership transitions coming to UT in the next academic year, the brouhaha over this dispute will most certainly not be dying down anytime soon. And the conversation will be sure to include a diverse range of topics, as it always has.

Reasonable arguments exist on both sides of this dispute. On one hand, services that are actually duplicative do little to improve the University, and saving jobs just to save jobs appears frighteningly Luddite. And while there are sure to be opponents of this proposition with such a mindset, the dispute runs far deeper. If the savings produced by this program are miniscule once Accenture’s chunk of the profits is garnished, would it still be worth it to accrue such bad press? And a question that must be repeated once more is whether the allegedly overlapping services are actually capable of providing the same quality of service in the new no-frills environment.