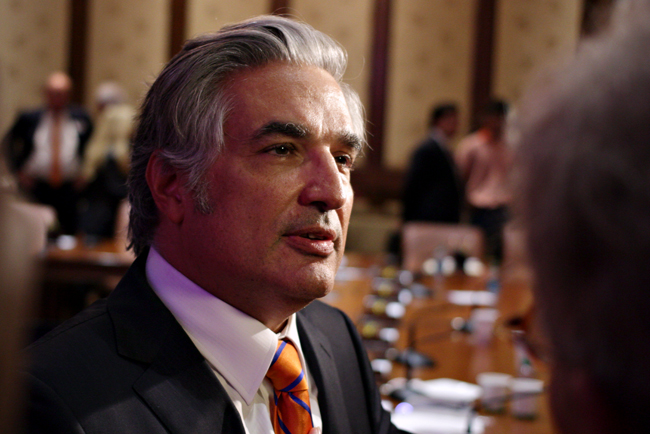 In accepting the UT System’s operating budget for the upcoming fiscal year, the Board of Regents approved Chancellor Francisco Cigarroa’s proposal Thursday to utilize more of the System’s endowment to offset the lack of in-state tuition increases.

Prompted by Gov. Rick Perry, the Board of Regents decided in May against increasing in-state tuition costs at the University and the other eight System academic campuses.

Following the decision in May, Cigarroa and Scott Kelley, executive vice chancellor for business affairs, devised a plan to offset the cost of not raising tuition. Their now approved proposal will allocate $28.2 million in recurring revenue from the Available University Fund, or AUF, toward the University.

"A lot of work went into that offset plan and a lot of different scenarios were looked at," Chairman Paul Foster told reporters after the meeting Thursday. "One of the challenges was coming up with a plan that was recurring."

The AUF stems from the public endowment known as the Permanent University Fund, or PUF, which is funded by the proceeds from the sale of oil, gas, sulfur and water royalties in West Texas and then invested in the form of stocks, bonds and equity interest. The return on these investments becomes the AUF, which is used to support both UT and Texas A&M University institutions.

Because UT-Austin is the only System institution that can directly receive AUF money, the System will cover costs and activities traditionally undertaken by the eight other UT academic campuses. The System intends to pay for costs related to property insurance and information technology and assume management of internal audit functions and digital library services, opening up $31 million for those institutions to use.

"It’s a very strategic initiative, so we don’t have to increase tuition for our students," Cigarroa said.

The regents also approved a one-time 1.5 percent increase in PUF distribution to AUF for the 2014 fiscal year. The decision brings the fiscal year’s distribution rate up to 7 percent. With the additional money available, the nine System academic institutions will each present proposals to Cigarroa over the next six months to show how they will use the money to increase both online and campus enrollment.

"Our revenues and the values of the our assets in West Texas have grown substantially in recent years to allow for a larger endowment," Foster said. "Our campuses have needs. We’re trying to increase access, which really means increasing enrollment. We’re trying to make an education available to a lot more kids, and we’ve got to find ways to fund that."

UT spokesman Gary Susswein said the University will review how it could spend the additional funding.

"We hope that this additional funding gives us what we need to maintain our levels of excellence at UT-Austin," Susswein said.

In discussing the budget with the regents, Cigarroa said the increase for the University accounts for the accommodation of the Dell Medical School and a more accurate research budget, which he said was under-budgeted for the 2014 fiscal year.

At Thursday's meeting, the regents approved the creation of a neuroscience institute, an engineering institute in Houston and allocated more than $2.5 million to expanding System-wide suicide prevention programs for students.