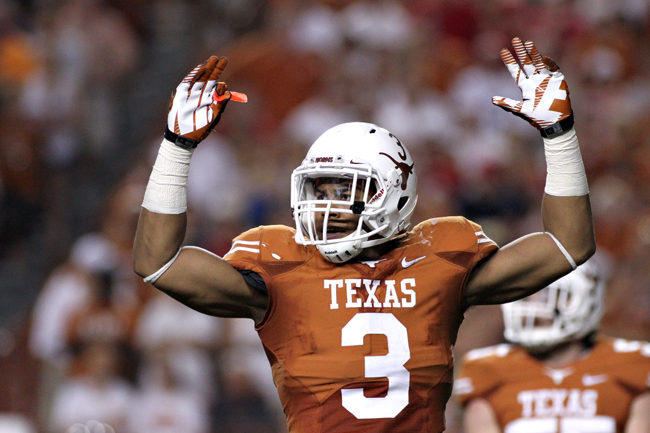 After playing in all 25 games his freshman and sophomore seasons, senior linebacker Jordan Hicks and his role on the team took a sudden plunge.

He played three games in 2012 and just four in 2013. Hicks — the top linebacker in his recruiting class and fourth-best overall prospect in the class of 2010 — wasn’t slowed down by skill but rather by injuries that kept him sidelined during the past two seasons.

As an honorable mention Big 12 Defensive Freshman of the Year, Hicks posted 23 tackles (nine solo), one sack, one tackle for loss and one pressure. He notched six tackles on special teams and even a tackle against No. 8 Oklahoma.

His sophomore year wasn’t much different. Hicks started eight games, and his 65 tackles was good for sixth on the squad — highlighted first by eight tackles, two tackles for loss and a sack against California and then by five tackles and two passes broken up in his first career start against Rice.

Garnering first-team Academic All-Big 12 honors in 2011 and six appearances on the Big 12 Commissioner’s Honor Roll, the sports management senior seemed set up for another standout season. And yet, as a likely starter for the 2014 season, he hasn’t seen much playing time since 2011. A 2012 hip injury earned him a medical redshirt followed by a 2013 season-ending Achilles injury.

“It’s nice to be back out there practicing and running around,” Hicks said. “It’s been awhile since I’ve been able to do that … being able to get my feet back under me feels really good.”

This will be Hicks’ fifth-consecutive season with the Longhorns.

“It’s been very, very difficult — very emotional,” Hicks said of his two injury-laden years. “But, you know, I’ve learned a ton about myself and who I am and what I bring to the table. You know, if I go back and think about those times, then it makes this year that much more precious to me.”

Hicks said he stuck with his faith and support system to transform each setback into new strength.

He’s also working on transforming his figure. Hicks has shed 10 pounds since the spring.

“I wanted to make sure I had my legs on me, and I could run, and I had my speed coming back,” Hicks said.

While building physical strength and mastering the Longhorns’ new scheme, he hopes he can “teach the young guys” and act as a mentor for fellow players.

However, the adaptations haven’t been easy. In one season, Hicks has to adjust to new coaches, a new program mantra, new teammates and new plays. But he says he’s up to the challenge.

“We are all out there working hard in the heat, in the hottest time of the day, grinding,” Hicks said. “The toughness is going to come.”