Dynamic front-court, experience among reasons Texas should be better 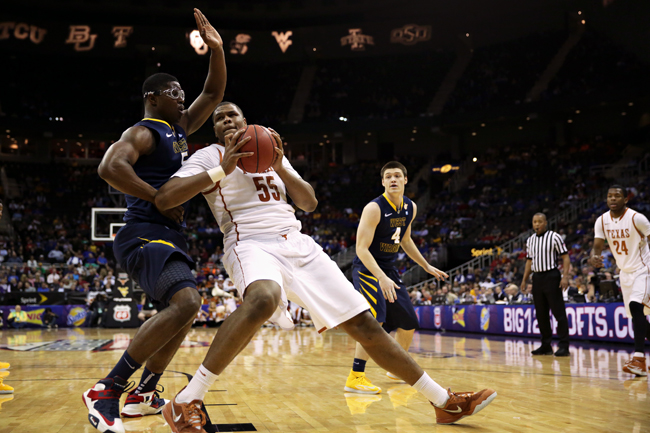 For all that Texas did right last year throughout its surprising 2013-2014 campaign, several key factors held the Longhorns back from climbing the ranking boards and joining the nation’s elite.

The Longhorns struggled with shooting efficiency last season, ranking ninth in the Big 12 and 238th in the nation with a .432 field goal percentage. Their defense also had considerable room to improve, as the 70.7 points per game allowed to opponents placed the Longhorns just sixth in the conference and 200th in the NCAA.

That said, a year ago Texas was one of the youngest teams in college basketball, and a year of experience figures to suit last year’s freshman and sophomores well. Coupled with the fact that Texas turned in one of its better recruiting classes in recent memory, the Longhorns appear poised to take that next step into contention for a conference title.

These marked improvements revolve squarely around incoming five-star freshman center Myles Turner. ESPN listed Turner as the Class of 2014’s No. 2 recruit — and for good reason. At 7 feet, 242 pounds, Turner boasts the size and athleticism to impact the game on both offense and defense.

Turner joins a frontcourt already featuring senior forward Jonathan Holmes and junior center Cameron Ridley, who helped lead Texas to a conference-best 41.4 rebounds per game last season. Adding Turner to that lineup gives Texas a trio of dynamic big men who each excel in rebounding and blocking shots and are also capable of scoring double figures on any given night.

The new Texas frontcourt figures to help the Longhorns run a more efficient offense, as the mismatches created by Turner, Ridley and Holmes down-low should lead to more easy shots in the paint. It should also open things up for three-point shooters such as junior guard Javan Felix and sophomore guard Martez Walker. Additionally, despite his stature, Turner possesses a pure jump shot that plays all the way back to beyond the three-point line.

The implementation of Turner at center helps the Texas defense considerably too, as it allows the 6-foot-9-inch Ridley to slide over to power forward. It also gives the Longhorns a second top-flight, low-post rim protector, which should help keep the ball out of the paint and force opponents to regularly attempt low-percentage jumpers.

Sophomore point guard Isaiah Taylor should also be at the forefront of Texas’ success this season. Taylor showed flashes of brilliance as a freshman, averaging 12.7 points and 4.0 assists last season, and now that he has a year under his belt he’s expected to be one of the Big 12’s best point guards this season.

Texas should limit mistakes and play more cohesively now that the roster is a year older. The Longhorns made just 67.1 percent of free throws and had an assist-to-turnover ratio of 1:10; both of those numbers, among others, should improve, thanks to increased experience.

The Longhorns boast the luxury of bringing back last season’s entire roster and supplementing it with one of the nation’s most highly regarded recruits. Texas won’t sneak up on anybody again this year, but it shouldn’t have to. The team should have improved enough on both offense and defense to put last year’s detriments in the past and start living up to new expectations.