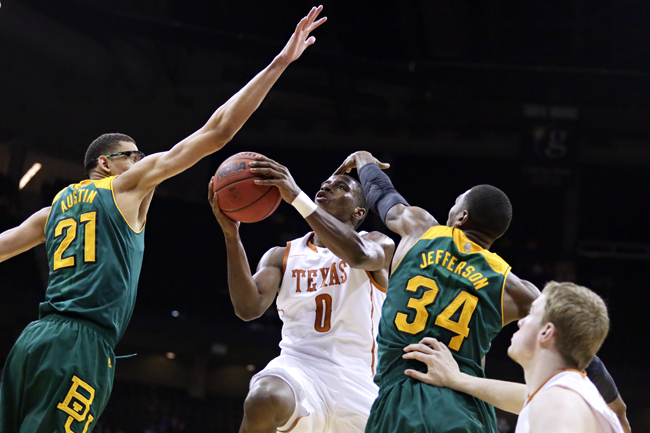 For the first time in four years, there is optimism, hope and hype surrounding Texas basketball.

The team is coming off its first NCAA tournament win since 2011, and instead of promptly losing eight players, this year’s team lost none. Everyone is returning, plus some.

Texas will be ranked to start the year for the first time since barely slipping into the preseason polls at No. 25 four years ago. As projected, it will be Texas’ first time in the Top 15 since opening at No. 3 in 2009, when the nation’s No. 1 recruit, Avery Bradley, made his appearance in a Longhorn uniform.

This time, though, it is the nation’s No. 2 recruit — center Myles Turner — who has raised fans’ expectations.

“I like the fact there’s a buzz,” head coach Rick Barnes said. “When you can land a player that’s sought after as much as Myles, it takes it to another level.”

“He will give us a chance to be more versatile,” Barnes said. “For a guy his size, people would think he is just an inside player, but he plays outside well. He can shoot the ball, and it can go through him. He’s hard to deal with in a pick-and-roll situation.”

But Turner isn’t the only incoming freshman ready to make waves. Forward Jordan Barnett will give the Longhorns a big, athletic wing — something they lacked last season — helping make one of the deepest Texas teams in recent memory.

The point guard position is solidified by sophomore Isaiah Taylor, while the rest of the guards are steady with offensive-minded junior Javan Felix and defensive-minded junior Demarcus Holland. Jonathan Holmes, the only scholarship senior, will anchor the forward position, while Turner and junior Cameron Ridley turn center into one of the team’s strongest units.

“It’s the core [a great team has] to have,” Barnes said. “That’s where I speak of Jon Holmes, Demarcus Holland, Cam, and Javan. That will be the core.”

Outside the core, junior center Prince Ibeh gives Texas rim protection. Sophomore guards Kendal Yancy, Martez Walker and Damarcus Croaker can provide energy, defense and shooting off the bench. Junior forward Connor Lammert and Barnett can provide rebounding and even more inside scoring from the bench.

“You can’t have five guys,” Barnes said. “You need a whole team.”

The depth on this team, recent success and emerging stars have made fans giddy.

“I don’t know if you ever want to temper expectations,” Barnes said. “I hope the buzz continues to climb because what we want to do is make the Erwin Center one of the great places to play.”

Barnes knows that winning drives a strong home-court atmosphere. And winning is what the fans expect this year — as they believe a Final Four appearance isn’t too far a reach.

“Our expectations will be higher than what anyone else sets,” Barnes said.