Longhorns on redemption tour after shocking end in 2013 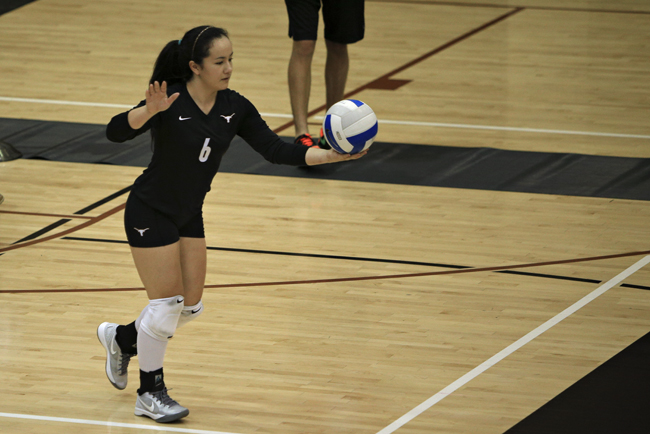 After its 2013 season came to a disappointing end in the NCAA Final Four, Texas put itself on the road to redemption.

Head coach Jerritt Elliott was shocked by the team’s poor performance on college volleyball’s biggest stage last fall. Texas was expected to play Penn State for the national championship, but, instead, the Wisconsin Badgers upset the Longhorns in four sets to send them home.

Despite going undefeated through conference play and winning its third consecutive Big 12 championship, Texas failed to reach its goal of winning back-to-back national championships. The Longhorns went on a 23-game winning streak that spanned three months in 2013, defeating, at the time, No. 2 Stanford and No. 1 Penn State. But the shocking loss to the Badgers seemed to overshadow the Longhorns’ success in 2013.

Now, Texas will look to claw its way out of that shadow as it begins its 2014 campaign. The Longhorns lost four seniors, including outside hitter Bailey Webster and libero Sarah Palmer, but the program brings back a team chock-full of talent that will look to win its fourth consecutive Big 12 championship. Key players returning for the
Longhorns are senior outside hitters Haley Eckerman and Khat Bell, as well as junior middle blocker Molly McCage and sophomore middle blocker Chiaka Ogbogu. Incoming freshman international standout Mirta Baselovic and high school All-American Cat McCoy are expected to make immediate impacts in their first seasons in Austin.

Baselovic will join McCage and Bell in one of Texas’ strongest positions: middle blocker. McCoy is expected to compete with junior Kat Brooks to replace Palmer at libero.

The Longhorns will rely on Eckerman throughout the season to provide a spark for the team. Eckerman, a two-time All-American, was named 2013 Volleyball Magazine Player of the Year. She was also named Big 12 Player of the Year for the second consecutive year and was a finalist for the 2013 Honda Sports Award for Volleyball.

To start the season, the Longhorns are ranked second in the American Volleyball Coaches Association preseason poll behind Penn State, despite receiving 11 first-place votes. Texas will look to continue its 16-game Big 12 winning streak in 2014 while attempting to make its sixth Final Four appearance in seven years.

Texas begins the season on the road in the University of New Mexico Tournament from Aug. 29-30, with the team competeing against UTEP, New Mexico and Seattle in tournament play.

Arizona vs. Texas
Texas’ first home game is against the Arizona Wildcats in the 26 West Longhorn Classic. Also competing in the tournament are Florida A&M and Central Florida. All games will be held at Gregory Gym on Sept. 12-13.

Texas vs. Nebraska
Texas will face a top-10 opponent when it travels to Lincoln, Nebraska, to face the Nebraska Cornhuskers on Sept. 20.

Zhejiang (Chinese Club Team) vs. Texas
The Longhorns will match up against Zhejiang, one of the top Chinese women’s club teams, when they meet in the first of back-to-back exhibition games in late October.