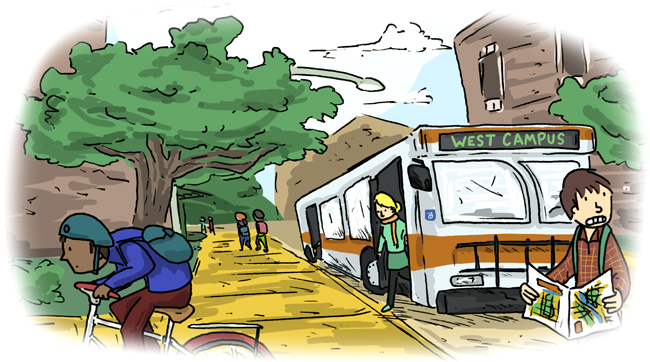 As the class of 2018 arrives on the 40 Acres, the dorms are being flooded with anxious freshmen waiting for the moment they get to meet their new roommates and determine who gets the bed next to the window. But while campus maintains a fluid ecosystem of students entering and leaving UT, the city of Austin does not have an admissions office to keep population in check.

Ranked “America’s Fastest-Growing City” by Forbes, Austin is in a state of growth unparalleled by the average metropolis. It turns out that the city that “keeps it weird” is no longer known solely for churning out live music and Longhorn graduates. Traffic is quickly becoming another staple of the city, making public transportation a necessity.

Here are The Daily Texan’s best pieces of advice for being public transportation-savvy this year:

Austin’s primary public transportation system is the Capital Metro bus service, which includes UT shuttle buses. CapMetro is free to all students with a UT ID and has stops on almost every corner of campus. There are blue and white CapMetro buses distinguished by a number and a street name. For example, one might see “7 Duval” in a banner above the driver’s seat. In addition to the CapMetro buses running through campus, there are also burnt orange UT shuttles. CapMetro’s newest additions to the shuttle system are the new MetroRapid buses, which are longer gray and red buses that make fewer stops and arrive more frequently. At each MetroRapid stop, a digital sign indicates the exact amount of time before the next bus arrives.

UT shuttles will have a location, such as “West Campus” or “Lake Austin,” displayed on the bus’ banner. UT shuttles have shorter routes, usually taking UT students and staff around campus and the immediate surrounding areas, whereas regular CapMetro buses travel farther distances. Both are free for those with UT ID, and their routes
often overlap.

If you have a smart phone, the quickest, most accurate way to become familiar with the bus system is to download a bus schedule app. The CapMetro app is free and offers access to the schedules for “favorited” stops. You can view maps by service or route number. The application has a particularly useful feature called “Trip Planner.” Enter the desired destination, and a number of route options will
queue up.

Another route planning application is “Transit Trip Planner.” The app requires the user to type in the destination — the starting location is automatically entered — and then multiple routes and times are shown to the user. The app is user-friendly and shows the selected route on a map.

Most bus routes that are based on campus are built for students and the locations they frequent most. For students who live in San Jacinto Residence Hall and have a class in the northern part of campus, the West Campus bus is ideal. For late-night rides to Sixth Street every Thursday, it’s the E-Bus. Below are some of the most useful, popular bus routes.

E-Bus — The E-Bus is a late night service that picks up passengers from UT, West Campus and Riverside and provides a safe alternative to driving to and from Austin’s entertainment district during weekend evenings (Thursday-Saturday from 8:30 p.m.–3 a.m.).

Lake Austin — Serves University housing at the Brackenridge, Gateway and Colorado apartments, Lake Austin Boulevard, and Fifth and Sixth streets, west of Lamar Boulevard. It stops on campus at 21st/San Jacinto, 21st/Speedway and 21st/Whitis Avenue. It’s perfect for going to Whole Foods or the trail around Lady Bird Lake.

MetroRapid — Runs every 12-15 minutes along two routes: the 801 along North Lamar Boulevard to South Congress, and the 803 along Burnet Road to South
Lamar Boulevard.