Moody College Dean Roderick Hart to resign in May 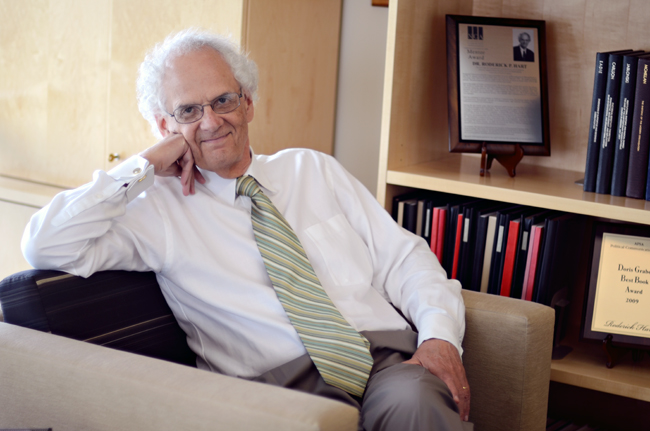 After a decade of administrative service, Roderick Hart, Moody College of Communication dean, announced that he will resign from his post in May 2015, in an email sent to faculty Monday.

Hart said after he completes his tenure as dean, he would most likely spend a year researching and writing before returning to teach at the University.

“I think it’s time for me personally,” Hart said. “I have not been able to teach as much [as dean], and I love teaching.”

Stephen Reese, associate dean of academic affairs at Moody, said serving 10 years in an administrative position is a lot for any dean.

“We’re thankful to have gotten him for more than one [year],” Reese said. “It’s a lot of pressure. It’s a lot of difficult decisions to make. He’s probably been our most successful dean to date.”

Hart has worked at the University since 1979, after serving as a professor at Purdue University for nine years.

During Hart’s tenure as dean, The Moody Foundation donated $50 million to the college in 2013, placing its name on the college. In Hart’s email that announced his resignation, he listed the opening of the Belo Center for New Media in 2012 and the college launching UT3D, the nation’s first comprehensive 3-D production program, as other highlights during his deanship.

After Texas Student Media moved from the Division of Student Affairs to the communication college in the spring, Hart worked to keep The Daily Texan on its five-day-a-week print schedule by requesting transitional funding from President William Powers Jr. to prevent TSM bankruptcy.

Hart said when he took the position of dean of the College of Communication in 2005, the college was lacking in discretionary income to create new programs and construct a new building to provide enough space for the large amount of communication students.

“I set my mind on trying to raise money for a new building, which we were able to do, and to refurbish the Jesse Jones Complex,” Hart said. “It’s just really satisfying that we were able to get all that work done.”

In a joint statement, Powers and Gregory Fenves, executive vice president and provost, said Hart will go down in the college’s history as a pivotal leader and as a favorite with students, faculty, staff and alumni.

“[Hart] has been not only a steady hand in a time of rapidly changing media environments and economic challenge but an active leader who has transformed the college for the better,” Powers and Fenves said.

Hart said he plans to spend his last year as dean teaching a communication and government course, “Voices of Citizenship,” in the fall and continuing to raise money for new programs, such as the Texas Program in Sports and Media and the new Center for Health Communication.

Hart also said he intends to take up men’s basketball head coach Rick Barnes on an offer made 10 years ago, when Barnes personally invited Hart to play point guard in a Longhorns basketball game. Barnes issued the invitation after Hart announced that the only thing that would make him happier than being dean was playing for the University’s basketball team.

“In spite of your lack of speed and agility, we believe you still possess qualities that may be an asset to us,” Barnes wrote to Hart in 2005. “Our players have a lot of pride in what they do, and we are confident that your presence on the team will increase that spirit and energy.”

In an interview with the Texan, Fenves said the University will start looking for the Moody college’s new dean in the next month. According to Fenves, the University will establish a search committee of faculty, staff, alumni, students and members of the UT community to conduct the search.

“It’s an exciting time in communications and [for] so many successful programs,” Fenves said. “I know we’ll be able to identify a great leader for the school.”