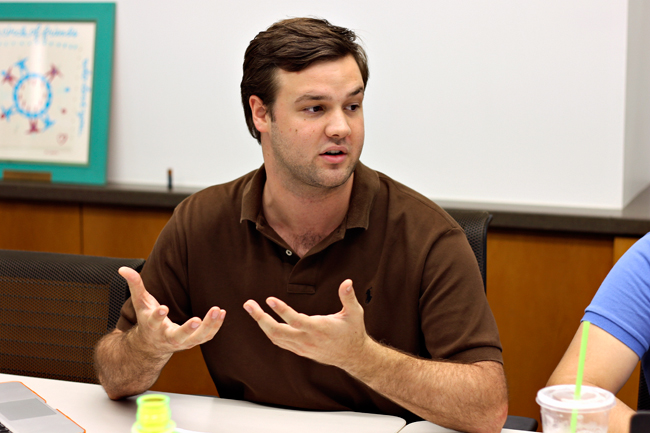 Student Government representatives and advisers, including representatives from the Office of the Dean of Students, reviewed the tentative SG governing document at a meeting Tuesday.

SG assembly speaker Braydon Jones said SG has used its constitution, bylaws and internal rules and procedures as its governing documents in the past. Now, SG will combine its bylaws with its internal rules and procedures to form one detailed document — “The Code of Rules and Procedures.” Jones said this code will accompany SG’s constitution, which was simplified last spring.

All of the information discussed at the meeting, including the code of rules itself, will serve as a rough draft that will be subject to change as the review process continues, Jones said.

In the code of rules, Article 5 Section 5.8 says all interview notes must be made public. Liberal arts representative Sergio Cavazos said he thinks the sections should be removed and presented to the SG assembly as a resolution.

“It’s a little more official,” Cavazos said. “That way, we can properly vet the situation and talk about federal privacy.”

In May, the SG Judicial Court released a ruling invalidating appointments to internal and external positions in the organization and required interview notes made by the SG Executive Board in the spring for those positions to be released to the SG assembly. However, the release of the notes was prevented when the Office of Legal Affairs determined in August that releasing the notes would be a violation of federal student privacy laws.

SG representatives opted to discuss the section in greater detail at a later date. Until then, the sections will remain in the code. During the meeting, SG representatives went line by line reviewing and discussing the rules. Jones said many of them were left in their original form, but other sections were added.

One of the proposed additions to the code is a 2.5 minimum GPA requirement for all agency members — the same requirement held for officers.

“If you put it in here, then you have to make sure every application you put out there gives [the Dean of Students] permission to check and verify that information on a regular basis,” said Cheryl Pyle, administrative services officer for the Office of the Dean of Students.

The representatives decided not to add the section to the code for the time being but planned to review it at a later date.

Another topic of discussion was the enforcement of agency rules. Jones said agencies — which are smaller organizations within SG — should be required to host two events per year and host meetings at a consistent time and location every week. Jones said these policies were added to encourage student involvement.

“I really believe agencies are the vehicles that can be used — and should be used — to reach students on campus,” Jones said.

To make sure agencies are in good standing, Jones said there should be an agency evaluation process added to the code. Jones said the details of the process have not been solidified, but it would involve a standardized review of SG agencies every two years. Jones’ addition to the code would give agencies an “under review” period to meet the set standards before being removed.

Cavazos said he plans to update the governing document with revisions from the meeting. SG representatives will meet again to discuss policy before releasing the code for assembly approval.