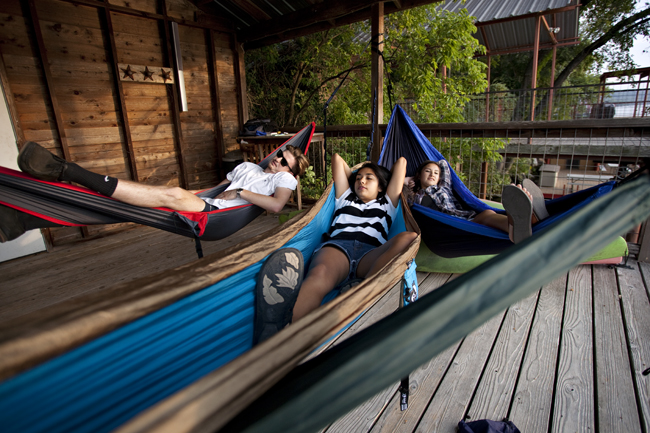 Hammocks strung between trees are an increasingly common sight on campus, and, beginning this fall, a new student organization is taking this pastime to the natural areas surrounding Austin.

Founders aerospace engineering junior Olivia Nguyen and marketing junior Jordan Lewis were hiking the Barton Creek Greenbelt together in desperate a search for a place to string up their hammocks when they realized there was a stark lack of student organizations that allow students to channel interests in hiking and hammocking. Their goal was to cultivate a sense of responsibility for the outdoors they love, so they created Texas Hammocking Club.

The club will focus on environmental causes and plans on volunteering for organizations such as Keep Austin Beautiful. The club is not enforcing any sort of service hour requirement for members, but it wants to
provide students an opportunity to give back to
the outdoors.

Students can participate in all aspects of the club as much or as little as they like, both social and service aspects, Vallejo said. Additionally, the club does not collect dues — prerequisites include owning a hammock, showing up and being prepared to hike.

The club plans to take group hikes in close locations, such as Twin Falls and the Barton Creek Greenbelt, and pitch their hammocks in specific locations discovered by the officers and members. According to officers, the list of hiking destinations is likely to grow and is open to suggestions.

Nguyen emphasized that the environment of the club is open, inclusive and encouraging. Reece Poth, architectural engineering junior and vice president of the club, hopes the organization
fosters a community of people passionate about the outdoors in all its forms and who come out to all of the club’s events.

“I think it’d be cool to have a solid core of people we see at every event,” Poth said.

The club also plans to organize an end-of-year camping trip for all of its members, a fitting alternative to a banquet, the officers said.

Ever since Nguyen and Lewis conceived their idea for the club, they have received a great response from friends and peers all across the University and have gained a significant following on Facebook. The club is working to gain further exposure in a variety of ways for this upcoming semester — fliers and T-shirts are in the works, and the group plans to table throughout the first few weeks of classes.

although the group has not set official meeting dates yet, those who are interested in the club will find its members strung up in hammocksall across campus throughout the tabling season.