Finally healthy, David Ash is ready to win once again 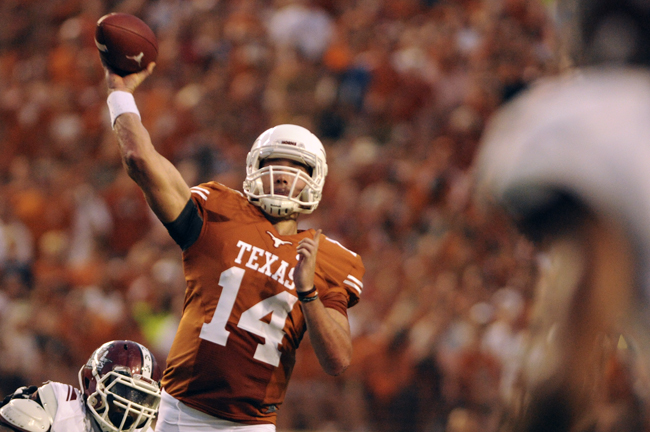 Last season, starting in the conference home opener against Kansas State, junior quarterback David Ash was poised for a standout season. After missing Texas’ defeat at the hands of Ole Miss because of an injury, the quarterback hit then-wide receiver Kendall Sanders in stride for a 63-yard touchdown, giving the Longhorns a 10-0 lead over the Wildcats.

But, as it would turn out, this game would stand out for an unfortunate reason. Concussion symptoms would cut Ash’s appearance, and his entire season, short.

“I’ve always felt like, if you want to know, if last year if I felt like I was on the verge of some pretty big breakthroughs? Yeah, I felt that way,” Ash said. “And it didn’t end up, and that’s OK. I just got to pick up where I left off and keep working to get there.”

In 2011, Ash struggled as a true freshman, throwing eight interceptions to only four touchdowns. But last season, the passer threw for seven touchdowns while rushing for one more in the three contests he saw action. In his past 15 contests, Ash has thrown 26 touchdowns to 10 interceptions, which is identical to the passing statistics posted by legendary quarterback Vince Young during the 2005 season.

Although Ash hasn’t exactly won enough to elicit comparisons to Young, numbers prove he has the potential to become a solid quarterback for the Longhorns. The senior has already proven that he is willing to put in the extra effort to make sure he does whatever he can to help his team win.

Ash’s critics often question his intangibles and abilities to guide his team to victory, as he has seen insubstantial game action through the past two seasons. But now entering his fourth year in the program, he has worked to make strides in that capacity.

“He has become a true leader,” said senior receiver John Harris. “You know he’s a senior, and he’s been in this position before. I don’t think that’s going to be a problem for anybody to follow him. We’re going to be right there with him. We know he can lead this team. We just want to see him do it.”

Ash’s biggest concern this season will be staying healthy, and, if he can do so, he will be able to provide strong leadership for his revamped team. Quarterbacks coach Shawn Watson has already seen Ash’s desire to prove himself after an injury-riddled 2013 campaign.

“He really wants to be a great player, and I think he has unsettled affairs after the kind of year he went through last year,” Watson said. “I respect that. I’ve listened to him. He has worked really hard, and he has played very efficient football. He’s had a great training camp. I’m really proud of him.”