Protesters arrested for obstructing traffic on the Drag 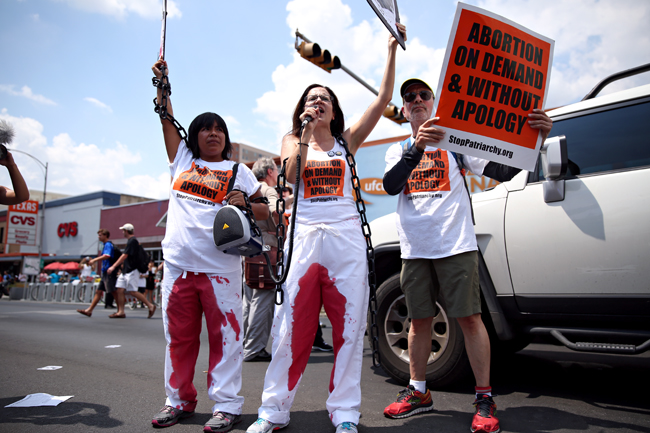 Five people were arrested on Guadalupe Street on Wednesday for obstructing traffic while protesting looming closures of abortion clinics in Texas.

The protesters are from the activist organization Stop Patriarchy, a national group not affiliated with UT. Fifteen members of the organization were on campus to protest Texas House Bill 2 — a law which will require abortion clinics to comply with certain standards that will cause many clinics to close come September.

Lead event organizer Sunsara Taylor and four other protesters were arrested after they stood across all four lanes of traffic on Guadalupe in front of the University Co-op and did not move to the side of the road, despite APD officers’ requests.

According to an APD official, the five individuals were arrested and charged with obstructing a highway or other passageway — a Class B misdemeanor.

Riley Ruiz, an event organizer, said the group decided to protest at UT because of its national influence.

“[We considered] the historical significance of UT-Austin and how things that have happened here reverberate across the country,” Ruiz said.

Stop Patriarchy member Joan Hirsch said the group is planning a sit-in at Gov. Rick Perry’s house all week to protest the bill.

“People have to stop looking up to the politicians, who have made it clear that they’re not going to fight, and put everything on the line for women’s fundamental rights,” Hirsch said. “This has been a week of defiance. We’re calling on people to come and be in front of Gov. Rick Perry’s mansion from 4-6 everyday.”