Modern haberdashery seeks to shine a new light on hats 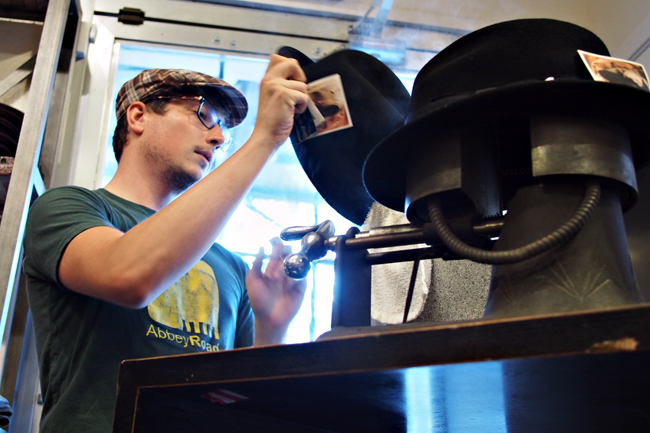 Aaron Sandlin could easily be called a hat advocate. As an employee at Hatbox: A Modern Haberdashery’s South Congress store, Sandlin appreciates hats for their elegant craftsmanship and design.

“I always like to say that hats are special because not everybody will wear them,” Sandlin said. “A hat can help your appearance; it can bring out something in your face. I get a lot of compliments when I go out. It’s nice that people still appreciate them.”

The shop, which was originally located on Sixth Street, recently relocated to two stores, one at The Domain in North Austin and the other on South Congress because of the remodeling of several storefronts on Sixth Street. The store plans to make a return in spring 2015.

Hatbox started out as Vertigo Inc., a gift and art store based out of Houston. Owner Lauri Turner eventually moved the shop to Austin. After several name changes, the store evolved into “A Modern Haberdashery,” displaying elaborate, handmade hats. Hatbox often works with artists and vendors around the world to bring products to the shelves.

Despite its Houston roots, Hatbox fits perfectly with Austin’s various locally owned companies. The store and its employees also attempt to adhere to many of Austin’s fundamental traditions.

“Most of the other hat stores you find are going to be part of a corporate chain,” Sandlin said. “Being a local, Austin-only store, we like to go along with the slogan of ‘Keep Austin Weird.’ We’re a weird company. People come in and say that hats are weird.”

According to Miranda Hilderbrand, Hatbox manager and UT graduate student, Hatbox sees its share of students interested in upgrading their headwear. She said young adults regularly flaunt the company’s products.

Joanne Kim, Spanish and chemistry sophomore, often finds herself wearing different types of hats, most of which are more contemporary, as opposed to the classical designs sold by Hatbox. Despite the difference in
design, she feels hats serve as a representation of
a person.

“[The hats I wore] changed over the years,” Kim said. “They are something that show my personality. I originally stuck with beanies. Now, I’m obsessed with snapbacks. If I’m looking for something formal, I’ll wear fedoras.”

Haberdasheries like Hatbox are somewhat of a rapidly
growing phenomenon
in a city that prides itself on being unusual. The employees at Hatbox say they try to convince people who don’t believe they could adapt to regularly wearing hats to simply give it a shot.

“People will come in and say that they like hats, but they wouldn’t look good on them,” Hilderbrand said. “We take that and say, ‘Challenge accepted.’”