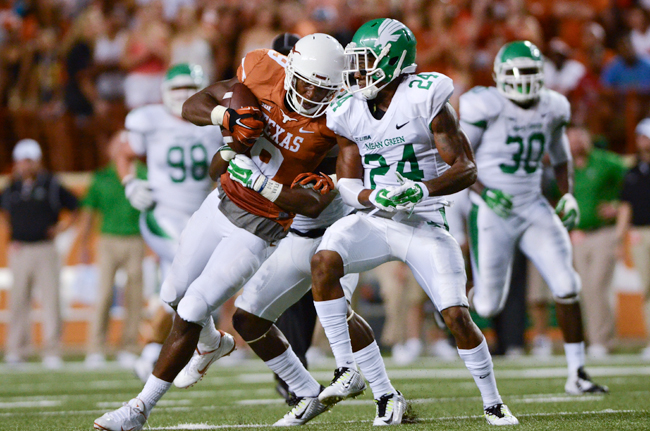 But instead, the next four seasons brought disappointing results leading to eventual changes in the program. Now, Texas’ few remaining 2010 signees, entering their fifth season with the Longhorns, hope to use 2014 to alter the perception of their class and their legacies.

“All of us fifth-year guys, we want to finish this right,” senior wide receiver John Harris said. “[When] we came in here, it was a year they went to the National Championship a year before. And to come in the next year and go 5-7 was a little bit tough. There might have been a little complacency.”

Harris is one of Texas’ fifth-year players taking advantage of the opportunity to play for a new coaching regime. Harris made several big plays for the Longhorns in the Mack Brown era, but, after missing the last 10 games of 2011 with injuries, he struggled with consistent reps. In the first game under new head coach Charlie Strong, Harris hauled in seven receptions, marking a career night after only catching nine passes in his first three seasons.

“He’s done what he’s needed to do to prove to the coaching staff and to the team that he’s a great player and that he deserves to be out there,” Hicks said. “He’s proving that to the world right now.”

Hicks is also looking to put together a healthy senior season after missing 19 games in the past two years because of various injuries. In addition, fellow senior linebacker Demarco Cobbs missed 15 games, including all of 2013 to a knee injury. Both Hicks and Cobbs recorded the first interceptions of their careers in their return this past Saturday.

“We are rooming together, so we’ve talked about this first game all offseason,” Hicks said. ”It’s been over a year since he’s played in a game, and I haven’t played since last year, so we’ve worked together. We’ve poured our hearts out into this game, coming back and making sure when we do come back that we were going to be in top shape.”

With injuries already affecting Texas this season, the three fifth-year seniors will try to lead the Longhorns past adversity. It’s the last chance to redeem a class currently remembered for missed opportunities and losses.

”We haven’t gone to a really big BCS bowl game since we’ve been here,” Harris said. “So I think just to finish this year right and try to help Texas get back to a 10-win record or 11-win record would be great for us to leave out of here. We just want to help get back Texas where it needs to be, and we want to start that with Coach Strong.”