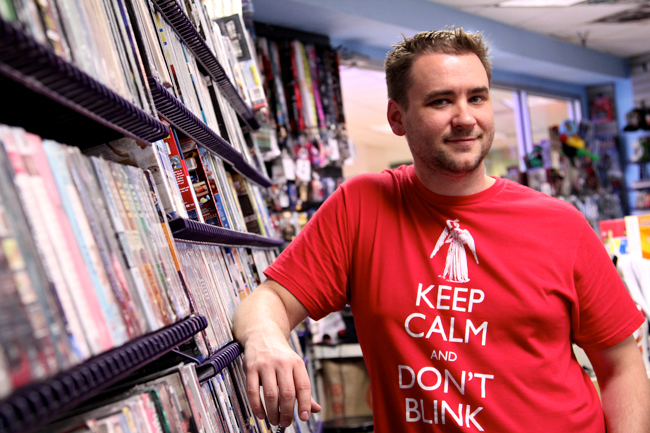 The tables on the upper floor of Dobie Mall fill each weekend with students trading, comparing and playing cards. Whether it’s silently debating strategies or arguing over card rulings, the students are playing to win.

These weekly tournaments are hosted by Resurrected Games, a shop in Dobie Mall that specializes in buying, selling and trading movies, video games and playing cards.

Resurrected Games owner Troy Arn runs the store along with his fiancé and four children, selling a vast selection of items including memorabilia, key chains and electronics.

“I started from nothing,” Arn said. “I had a garage sale and used the money to get more stuff and resell it, and I eventually had enough stuff for a flea market stand. I just kept buying and reselling until I had enough stuff to open a game store. It just took a lot of time and patience.”

Arn said customers have plenty of options to choose from.

“We have ‘Yu-Gi-Oh!,’ ‘Magic’ and ‘Pokémon.’ We have action figures, graphic novels and CDs. We have all kinds of stuff,” Arn said. “You could trade a video game here and walk out with movies, or trade in cards and walk out with a new Playstation 4. We fit all the genres of entertainment.”

Particularly, Resurrected Games has grown to become a gathering place for students to play trading card games. According to Arn, the two most popular games are “Yu-Gi-Oh!” and “Magic: The Gathering.” Both card games involve skill and teach players patience and strategy.

Studio art junior Alexander Chavira is a fan of “Yu-Gi-Oh!” and enjoys both the skill involved with the game and the opportunity to bond with other players.

“I’ve made a lot of friends in the game,” Chavira said. “It’s a gateway for more social interaction. For example, just because I play ‘Yu-Gi-Oh!,’ there are people who come over to my house to talk for a while and trade. We sort of identify [ourselves] as a group.”

The store organizes “Yu-Gi-Oh!” and “Magic: The Gathering” tournaments every weekend, allowing players to hone their skills and meet new people who also share a passion for the games. Biology junior Shrineil Patel said that games like “Yu-Gi-Oh!” are great because they are cost-efficient.

“Sometimes you use your brain — sometimes you don’t,” Patel said. “It’s just fun. It’s not really cost intensive, [and the price] is reasonable.”

“If you’re spending $1,000 every week on ‘Magic,’ I think that might be a little too much,” Patel said. “You’re free to buy what you want, but you should stay reasonable. Think about your college budget, and try to accommodate it.”

Though he values the social aspect of playing games in a group, Patel said playing “Yu-Gi-Oh!” and “Magic” is a hobby that he will drop after he graduates. Chavira, however, said there is no foreseeable end to his hobby.