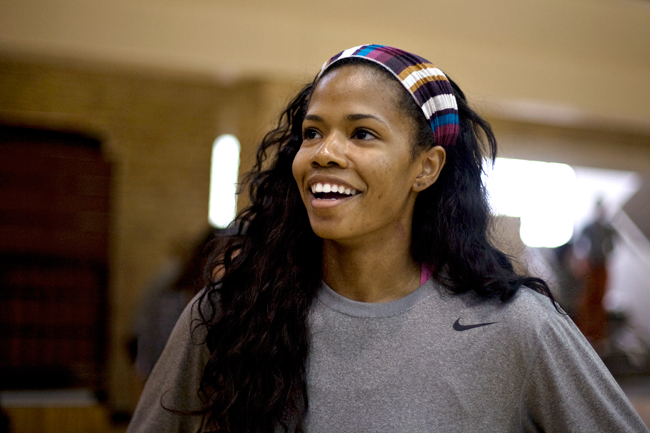 Though she’s been in Austin for over a year, redshirt junior Tiffany Baker stepped onto the court as a Longhorn for the first time last week.

Last season, Baker suffered a knee injury that kept her from playing all of last year. But after a year of recovery, she got the chance to put on her new Texas uniform for the first time at the Lobo Classic.

“It was a long recovery,” Baker said. “It was gruesome, but my trainer and teammates were super supportive.”

Baker, who transferred from Tennessee in spring 2013, said her first time playing with the Longhorns didn’t disappoint.

“Honestly, it was something I’ve been looking forward [to] ever since I got here,” Baker said. “It was hard sitting out that long because I’ve never had an injury that serious, but my team was super supportive, and it’s been awesome to be back on the court with them.”

Baker said she learned a lot during her recovery, which gave her the ability to improve as a leader and as a player.

“My leadership skills grew,” Baker said. “I got to know the team more. I wasn’t super vocal as a leader before this. Getting that time off, I got to know personalities and know how people worked on the team, so that helped me to get more comfortable leading vocally when I’m not on the court.”

“I’m so proud of her work ethic,” Elliott said. “She’s a really special one. She’s got tremendous work ethic. She’s extremely solid. She’s committed to the team. She may not be playing as she’d like, but she brings a lot in terms of support and leadership, understanding what it takes to be great for the younger players.”

Baker is no stranger to success, though. As a senior in high school, she was named the Texas Gatorade Player of the Year and won a state championship with 5A Hebron High School.

As a freshman at Tennessee, Baker and the Lady Vols won an SEC Championship and then finished third in conference in 2012. But, the following year, she wasn’t happy with her situation in Knoxville and decided to transfer to Texas — a decision she doesn’t regret.

“It’s extremely more competitive in the gym,” Baker said. “It’s amazing. I love it. It’s what I came here for, is to compete every day and play at a high level.”

As Texas prepares to face Florida this weekend, Baker hopes to get a win against her former SEC rivals.