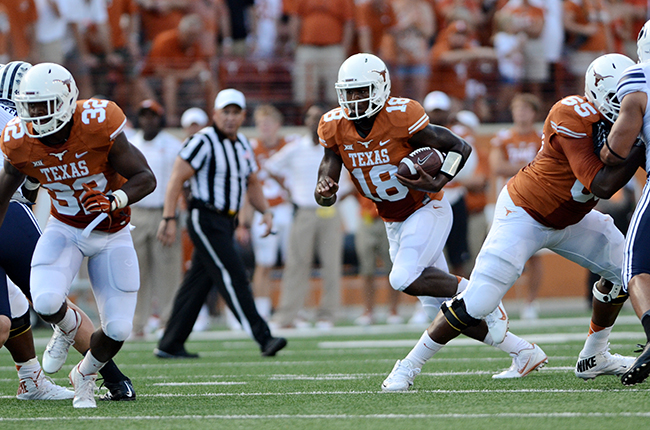 Texas was unable to sustain a rhythm in the first half on offense and entered the break down 6-0.

Sophomore quarterback Tyrone Swoopes completed his first eight passes, finishing the half 11 for 15 for 100 yards. Most importantly, he didn’t make any mistakes to put the Texas defense in bad situations.

Texas drove all the way to the BYU 13-yard line in its second drive, but missed a field goal following a penalty on third down.

Texas’ rushing game has struggled behind the offensive line as junior running back Johnathan Gray ran six times for 27 yards and senior Malcolm Brown took seven carries for only 12 yards at the break.

Texas allowed 97 yards on the ground in the first half of play after giving up 349 yards in the same time frame a year ago in Provo, Utah.

The Longhorns have been fairly effective in shutting down BYU quarterback Taysom Hill, holding the quarterback to 66 yards on 14 carries. Hill was 11 for 16 throwing in the half, but threw a costly interception in the end zone to senior cornerback Quandre Diggs after the Cougars moved the ball from their own eight-yard line to start the drive.

Texas coughed up two fumbles in the first half, including one inside its own 20 that resulted in BYU’s second field goal.

BYU will receive the ball to start the second half.