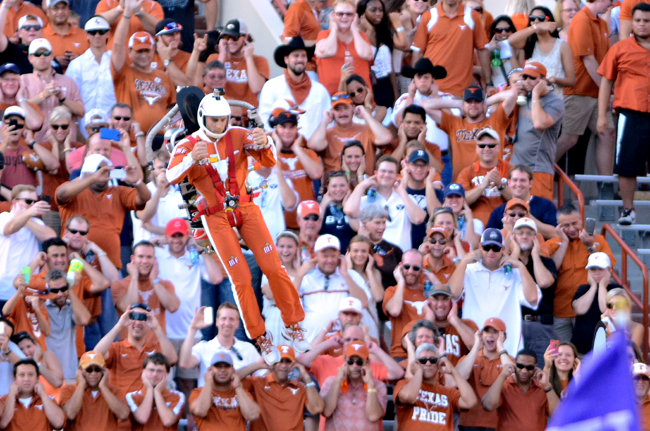 The flight, sponsored by Mighty Fine Burgers Fries & Shakes, replaced the ketchup and mustard chase shown on the scoreboard at Darrell K Royal-Texas Memorial Stadium in previous seasons. In the new promotion, the pilot lands on one of three colored tarps laid out on the field. If fans send a text with the correct color the pilot landed on, they win a free burger at any Mighty Fine location.

According to Mighty Fine spokeswoman Allyson Young, the “Mighty Fine Longhorn Liftoff” will continue throughout the rest of the home football games this season. She said the cost per flight is about $1,000.

Mighty Fine co-owner Ken Schiller said the idea for the stunt was inspired by an NFL game, in which a pilot flew into the stadium using a jetpack to deliver the game ball.

Schiller has been trying to introduce a jetpack to the pregame show for several years and worked with JetPack International to organize the event for the 2014 season.

The first flight, which took place Aug. 30, before the football game against the University of North Texas, may have set a world record. According to a statement from K&N Management, which owns the Mighty Fine chain, the 93,201 fans in attendance at the game established the world record for the number of people to collectively witness a jetpack flight. K&N Management will submit the record to Guinness World Records.

Trey Goldsmith, co-coordinator of the flight, said Mighty Fine has been involved with UT Athletics for the past 20 years, and they are looking forward to improving the stunt in future games.

Nick Macomber, JetPack International’s performance pilot, who said he has been flying jetpacks for the past three years, piloted the jetpack. In time as a flier, he has held flights in the United States, Mexico, Australia, Dubai and several countries in Europe. He said one of his most memorable events was flying in the torch during a relay for the London 2012 Olympics.

Even though his flights are short because of how quickly the jetpack runs out of fuel, Macomber said the event has provided more excitement to UT football games.

“I am glad to be a part of UT sports,” Macomber said. “It is a cool thing to follow this dream and to know that others have this passion and to show the world what jetpacks are all about.”