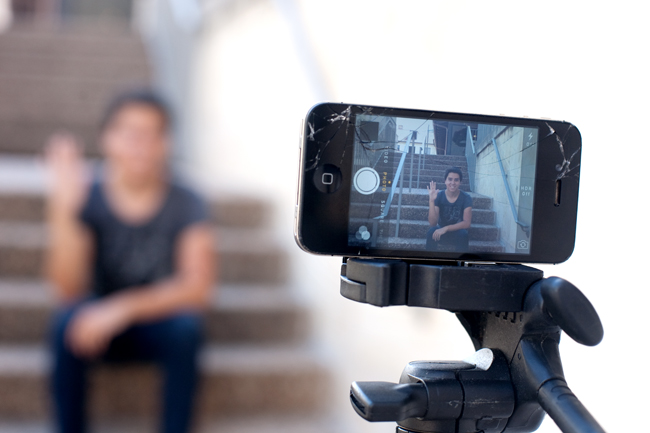 The most popular YouTubers tend to rely on high-tech devices to record their videos, bringing in millions of views with high-definition cameras and studio lighting. But for radio-television-film sophomore Michael Westlake, a strict college budget only allows him access to his iPhone camera. Despite that, Westlake started filming and posting comedy sketches over the summer under the username “Spike Westlake.”

“People tend to overlook the creative content that Youtubers post because they think it’s really simple to make and not really worth looking at,” Westlake said. “While a video may be two minutes, it takes a lot more than two minutes to make, edit and come up with it.”

Westlake is one of a growing number of students on campus who identify as YouTubers. In one of his videos, “How to be Healthy,” Westlake satirically explains the steps needed to live a healthy lifestyle. This idea took only days to come up with, but it ended up being Westlake’s most viewed video to date.

Business sophomore Evan Chen, known as “Koolasianguy1,” is another YouTuber on campus.

“There are a lot of people who are shy and sit in the back of the class, and this is a way to show people about yourself,” Chen said. “It’s a way to express yourself through social media.”

Chen said his success came from the idea of entertaining his group of friends. Initially, the videos were a small project, but his song covers and exercise videos ended up getting more attention than expected. Before freshman year even started, Chen was immersed in the UT Facebook community under the moniker “Big Chen.”

Keely Danielle, a health promotion and allied health professions senior, makes video blogs with lifestyle tips as “Dani Austin.” Within four years, Danielle has managed to get over three million views and 109,000 subscribers.

“The response I started to get after I started was totally unexpected,” Danielle said. “People were super supportive [and] always encouraging me. Sometimes, they would give me constructive criticism, but it was like they really wanted me to do well, and they were actually trying to help.”

Danielle said she did not receive too much attention at first, but then, suddenly, she received more than 100 friend requests on Facebook and saw that her videos were trending. With this influx of attention, she started to reach out more to her viewers.

“You actually build a connection with these people, even though you don’t know them in real life,” Danielle said. “I honestly had no idea what to expect, but I never thought I’d be doing this. I feel really lucky.”

From the success of her channel, Danielle has been approached by companies like Target for product promotion. She has even started up her own online business, which was something she didn’t see herself doing.

“I feel like YouTube has opened so many doors for me,” Danielle said. “What I plan on doing in the future is completely different than what I thought I’d be doing, and I think it’s crazy because YouTube is still pretty new, but people are starting to catch on.”