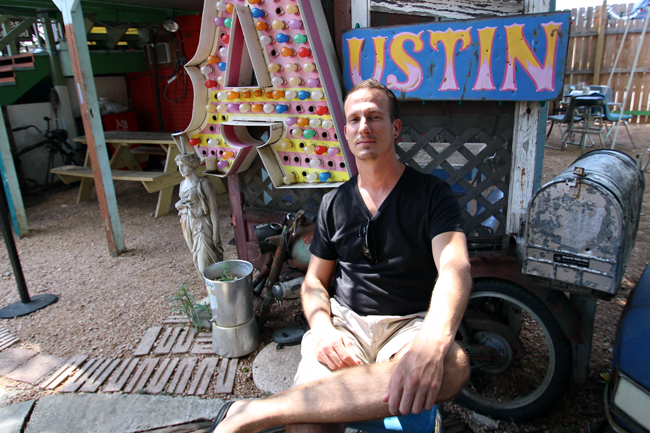 Nathan Davis is the guy quietly serving customers Thai food out of a West Campus food truck. He is the Favor runner delivering Chipotle to hungover college kids Sunday mornings. He is the guy at the farmer’s market stand down the street on the weekends.

Nathan Davis is the guy who started over at 30.

After moving from his small South Texas hometown to Austin, Davis started out his college career the way most do — getting an undergraduate degree at Texas State University. From there, it
got complicated.

Davis began to travel the world for his studies, going to China and then to England, where he got a master’s in cognitive linguistics.

He became a professional student.

Davis continued his travels and received a scholarship to study Mandarin in Taiwan. After staying there for five years, it became a second home for him.

Although he felt comfortable in Taiwan, Davis said it was where he “got lost.” He realized he wasn’t focusing on his studies anymore and had lost touch with his true home — Texas.

So, at age 30 and with two degrees, he came back to Austin to start over.

“I’m at this point in my life where I’m going back and building from nothing. Up until this point, I haven’t really been clear.”

Instead of continuing his studies and pursuing a doctorate., he wants to work as an entrepreneur and is committed to creating social solutions through startups. A goal of his is to create more food markets in America.

He is starting to find his place back in Texas behind the window of a food trailer, behind a computer screen coordinating deliveries and behind a vegetable stand.

“I finally get myself. Things have come full circle for me.”