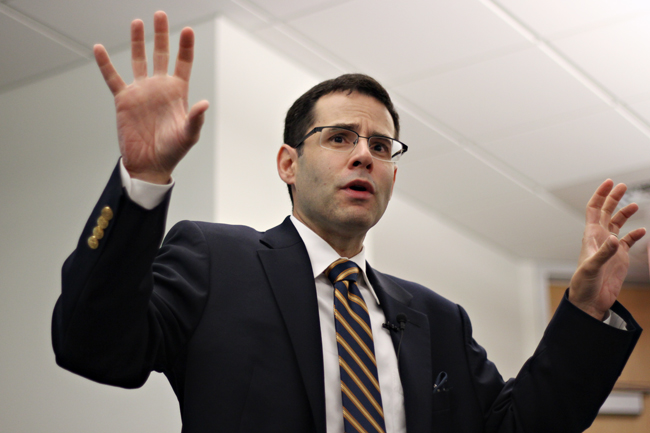 Claiming the U.S. faces an era of global disorder, Michael Auslin, director of Japan Studies at the American Enterprise Institute think tank, discussed political and social problems in Asia at the Lyndon B. Johnson School of Public Affairs on Tuesday.

Auslin, who is also a columnist for The Wall Street Journal Asia and a former Yale University history professor, said the U.S. government and governments of other major countries — including China and Japan — should work together to create a strategy that will help resolve political, economic and other types of issues in surrounding countries.

“All the U.S. or the United Nations does has an effect on the outside,” Auslin said.

Auslin is currently working on a monograph, or a written study of a specialized subject, called “Ocean of Risks,” which will explain why Asia is globally important. Auslin believes the American government needs to see where the trends of democracy, militarization and economics are going in the region.

“I argue that the long run for the United States—for the next two generations or so—is going to be dependent in terms of our standing [in] the status of the world,” Auslin said. “Our economic health, our political influence and certainly the degree in which we uphold and maintain commitments around the world. And all of this is tied to Asia.”

The lecture was presented by the University’s Clements Center for History, Strategy and Statecraft. After the talk, Jessica Carrillo, global policy studies graduate student, said she believes the U.S. and other nations should be more involved in helping their less politically stable allies.

“It is very important that students understand this conflict for the benefit of the future,” Carrillo said. “I believe that the U.S. should be involved in Asia and have a clear goal of what they want to do.”

As countries such as Ukraine and Syria face significant conflicts, Auslin believes the U.S. and other global powers should be concerned about the balance in Asia when it comes to power and stability.

“As Dr. Auslin said, there should be a significant presence from the U.S. and other countries in these and other regions,” public policy graduate student Megan Reiss said. “We need to back up our allies and strengthen relationships.”