Strong’s message still not getting across 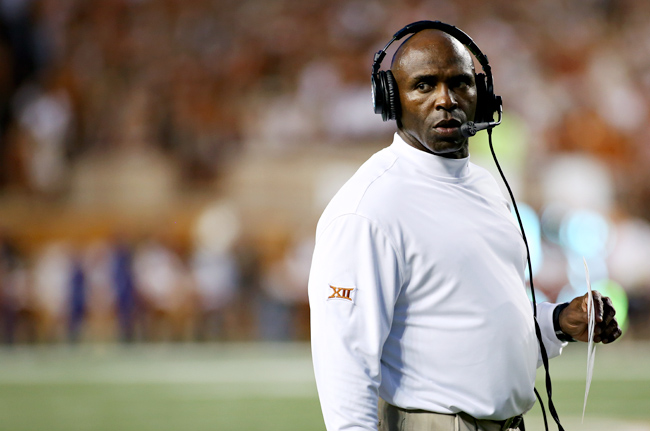 Last week, head coach Charlie Strong redecorated the Longhorn locker room, filling it with images from last year’s loss to BYU in Provo, Utah. He posted photos of BYU quarterback Taysom Hill running all over the Texas defense, stats from the record-breaking performance and more — all in an attempt to motivate his players.

But Strong didn’t mean for the decorations to stay up all week.

The new boss was disappointed. He was testing his players, hoping to see just how badly they wanted to avenge last year’s loss.

“I did it for a reason, just to see what we would do,” Strong said. “I wanted to see if somebody would just get pissed, and somebody would pull it down, and then, the next day, go there and put it up again, somebody walk through there and tear it down again.”

His players, however, didn’t even think about touching the new decor — let alone tearing it down.

“We really didn’t know that’s what he wanted us to do,” senior defensive back Quandre Diggs said. “You don’t want to rip it down and be in the pit with Coach Moorer. I did want to rip the stuff down, but I didn’t want to be the guy to get yelled at for ripping them down.

The apparent miscommunication is just one example of several recent incidents that appear to indicate Strong is still having difficulty getting his message across to the players.

Clearly, some players are either struggling to understand what Strong expects from them or simply don’t care to conform.

Strong insists that the majority of the team is onboard, but did acknowledge his frustration with persistent issues within the team.

“When you look at it, you have 95 percent of the team that are doing it the right way,” Strong said. “You get frustrated because you look at a talented group of players that you have to suspend that could really be helping this football team.”

As with all change, there was an expectation that the transition from former head coach Mack Brown to Strong would take some time for players to get used to. But it’s been nine months now, and it still seems as though Strong and his players aren’t on the same page.

How much longer will it take for that to happen? The answer could determine how much this year’s team is capable of accomplishing.