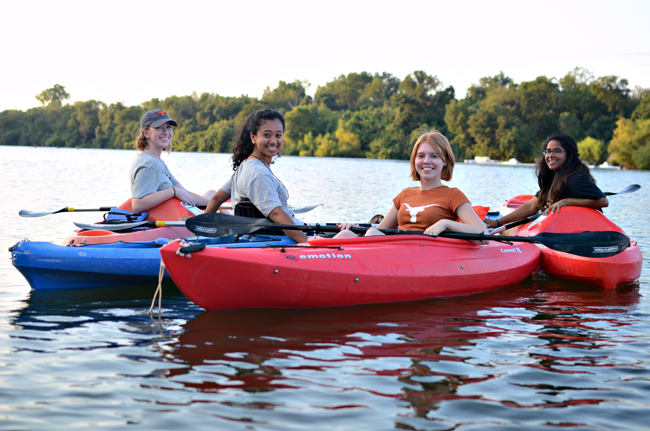 For the past few months, architecture juniors Joanne Koola and Zoe Brown have been recruiting students for their new student-run club — Canoeing and Kayaking Enthusiasts, better known as C.A.K.E.

Koola and Brown said members will go kayaking and canoeing with groups for about an hour every other week and share a few desserts along the way.

During an architecture class their freshman year, Koola and Brown discovered they shared a love for kayaking and wanted to get involved in a kayaking club on campus. Unfortunately, UT did not have any such club for them join because, Brown said, UT doesn’t have a dock to provide to students.

“I think this could be a really big part of UT,” Koola said. “Because of its location and the culture of Austin, there are a lot of enthusiastic people that are willing to commit, and we’re excited about it.”

Jessica Sadasivan, vice-president of C.A.K.E. and an architecture junior, will be one of the floaters leading the members.

“I really love kayaking,” Sadasivan said. “I don’t know how many times I’ve gone kayaking, but it’s something that’s fun and relaxing. This is one of the few clubs at UT that gets involved with the rest of Austin. We’re kind of like a social leisure club.”

Since the club’s first meeting announcement, 50 students have joined, and the number keeps growing. Koola said, because of the amount of interest the group has received, the kayaking outings will be split into biweekly groups led by officers. At each outing, cake will be provided to the members.

Sadasivan intends to get involved in kayaking for sport and to meet new people.

“For architecture students, we live in a small hole on campus, and we’re sucked into it,” Koola said. “We never get to meet anyone, so I think it’s a great opportunity for us to meet other people.”

In order to accommodate busy students, meetings will be held on campus in a more laid-back atmosphere.

Koola said she’s approaching her hardest semester in architecture, and this club will be serve as a way to de-stress and meet new people outside of her major.

“We know that, once the school year starts, people aren’t going to want to leave campus for like an hour to go kayaking,” Sadasivan said. “So, because the whole acronym C.A.K.E. fit, we figured we’ll just provide a few meetings where everyone can take a break from studying and eat some cake.”