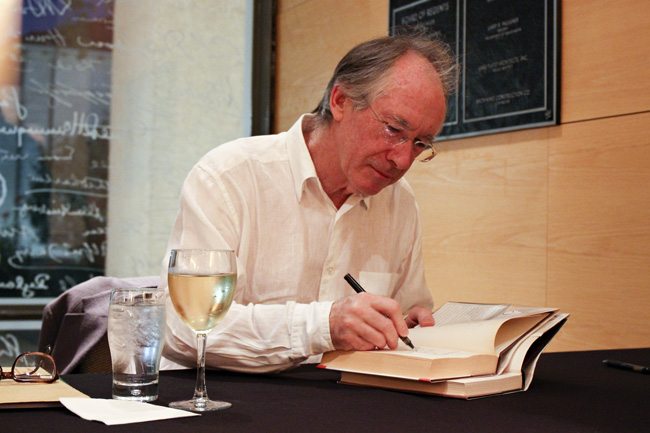 McEwan is well known for his short stories and novels for adults and has won various awards for his distinguished works, including “Amsterdam,” “First Love” and “The Child in Time.”

The Ransom Center, a humanities research library and museum at the University, became home to McEwan’s archive in May. The archive includes drafts of his already published novels and some unpublished material from his adolescent career.

McEwan said his newest novel was born from his interest in how one makes judgements.

“As ethical decisions are to be made on a daily basis, I began to take an interest in how judgments are made,” McEwan said. “It is not only judges who have to make verdicts.”

Virginia Reeves, a former member of the University’s Michener Center for Writers, who attended the presentation, said the McEwan archive is a great opportunity to get a closer look at information that only scholars or students writing their dissertations would be able to access.

“You get to see letters and drafts that have not been published, so I think it’s a wonderful thing,” Reeves said.

McEwan said the idea of judgements remains a focal point throughout the novel, first making an appearance in the first chapter. McEwan said his book is based on the idea that making judgments and verdicts often carries grave consequences.

Following the presentation, Ransom Center members and students formed long lines to buy copies of the novel and get an autograph from McEwan.

Shannon Geison, a finance and government sophomore, said McEwan’s reading gave her a better understanding of his work that she read while she was in high school.

“In high school, I read ‘Atonement,’ which is probably regarded as his most famous book, and I absolutely loved it,” Geison said. “I really enjoyed seeing more of his work because I had only read one and was thus really excited to learn more about it and especially him reading it himself.”

Michener Center Director James Magnuson said McEwen’s presence was welcome at the Ransom Center as he is one of the most distinguished novelists of his generation.

“We are very happy to bring him back to Austin, and certainly any publication of Ian McEwan is reason enough for celebration,” Magnuson said.