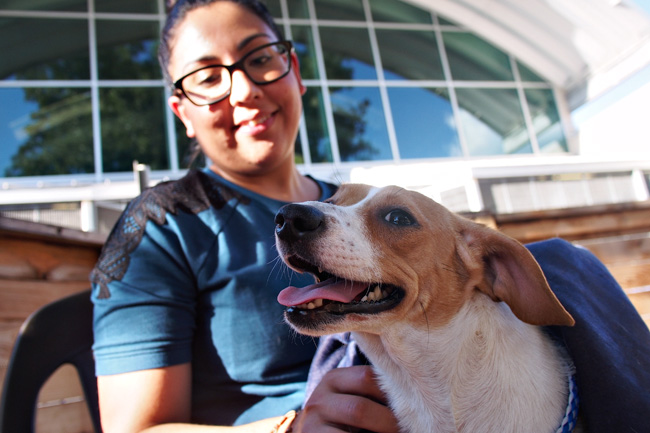 Animal Planet and its “R.O.A.R. To Their Rescue” program made free pet adoptions in the Austin area possible for a limited time.

R.O.A.R. To Their Rescue is a combined effort by Animal Planet and The American Society for the Prevention of Cruelty to Animals to help shelters around the country by encouraging people to adopt with no adoption fees. Kasey Spain, Austin Animal Center spokeswoman, said the money came unexpectedly.

“Animal Planet contacted Austin Animal Center and Austin Humane Society in town and said they wanted to give us a grant for $25,000 to help get pets adopted in Austin,” Spain said. “They sent advertising materials we could use, and they got us all of that and we distributed it. We hung banners, talked about it in social media.”

As of Sept. 5, the shelters still had $15,000 available to spend on adoption waivers. Spain said there has not been a significant increase in the numbers of adoption with the program.

“Our numbers vary every year about the same time,” Spain said. “We have the same amount of adoptions. It’s pretty typical for us to have a lot of adoptions when we have promotions on the weekend, but they’re typical for what they are during a promotions.”

Biology senior Evelyn Chou volunteers at AAC as a customer service representative and also socializes dogs with people. She has been working with animals since her freshman year and said she likes seeing the difference she makes in an animal’s life.

“Just knowing you’re helping someone who is probably more appreciative — you can tell on a dog’s face that they’re so grateful to be let out,” Chou said. “There are a lot of volunteers, but some of them are spotty with their commitment, so some of the dogs don’t get walked, and they’re so excited to get out. I foster dogs too — it’s so awesome knowing I’m helping a dog and a person.”

Kinesiology junior Lilian Rodriguez adopted her Australian Shepherd-rottweiler mix from AAC last week. She said she had no idea Animal Planet was doing a promotion before she decided on a puppy.

“I didn’t know about it until I got there,” Rodriguez said. “I thought it was going to be $150, but I was okay with that as long as it had all its shots. But, when we got there and signed papers, they gave us a card and said it was a $0 fee.”

Rodriguez said she had been toying with the idea of getting a dog for years. When she got to AAC, she fell in love with one dog.

“He has a really cute baby face — he’s 1 year old,” Rodriguez said. “We were going first for a puppy, but we figured older dogs were adopted less. We really bonded with him.”

The waived adoption fee came as a nice surprise to Rodriguez.

“I was really excited because, with my apartment, we have to pay a $400 fee to be able to have a dog,” Rodriguez said. “It was going to be a lot of money just to get the dog.”

Rodriguez said she took her job on a PetSmart shopping spree with the money she saved.

“We got him a nice pillow bed and nice type of food and treats and toys,” Rodriguez said. “We’re going to get him a Halloween costume. I want to be a pumpkin, so he’ll probably be a pumpkin as well.”