Texas’ game against UCLA will gauge success of ‘parent-child’ relationship 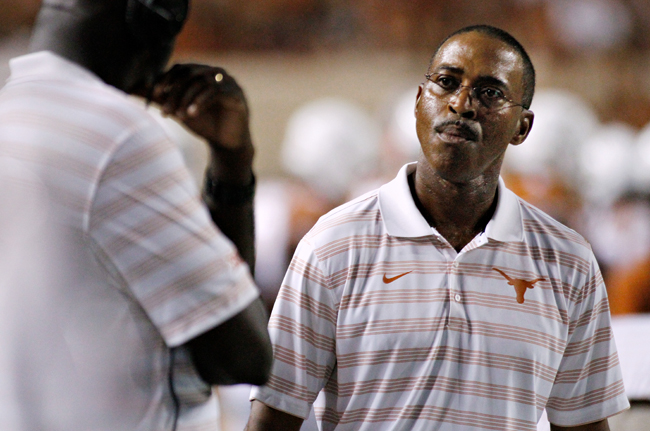 Defensive coordinator Vance Bedford has some advice for the Longhorns: Take a look in the mirror.

“If you can’t be your worst critic when you wake up in the morning, and you look in the mirror, what do you see?” Bedford said. “Some [players] walk around with a crown on their head all the time. They really need to take the crown off and see reality.”

If the players don’t see reality now — BYU’s 41-7 destruction last week certainly looked like reality — it will hit them full force in Arlington on Saturday. Reality will take the form of Brett Hundley, Heisman candidate UCLA junior quarterback; Myles Jack, sophomore two-way linebacker and running back; and the remainder of the threat that No. 12 UCLA poses. To prepare, the defensive squad is trying to take Bedford’s advice to heart. They didn’t quite look in a literal mirror, but they did watch game film.

“Our whole attitude is that, if we expect something to change, and we want to be the best defense in the country, then we have to act like it,” senior defensive tackle Desmond Jackson said. “We have to go out there and play with some juice, play angry, play smart and play fundamentally sound. Last week, we didn’t do that.”

The squad found the “little things” that they say prevented their efficiency, as well as the more glaring problems, such as last week’s six missed sacks.

“When you have opportunity in life, you have to make the best of them,” Bedford said. “In the game of football, when the ball is in the air, you have the opportunity to go make a play. We missed a lot of opportunities in that game in the third quarter. We didn’t give ourselves a chance.”

Although Bedford, head coach Charlie Strong and the rest of the coaching staff seek to give the Longhorns as many opportunities as possible once they’re on the field, the road to playing time is longer than it once was. Suspensions abound when players don’t follow the rules, which will leave Texas with a compromised lineup this weekend. But Bedford sees the adjustment as just one more reminder that the players need to face reality.

“If you’re a parent at home, and your child does something wrong [with no consequences], what are you teaching that kid?” Bedford said. “As a football coach, guess what? You’re a parent. You’re a parent, you’re a teacher, you’re a counselor, you’re a psychologist. You’re all of those things in one. You have to be an extension of mom and dad, teach them discipline and how to do [the] little things right.”

Heading into Arlington, the Longhorns have a chance to prove they’ve hit that development and can handle their first away game, albeit at a neutral venue. The first family vacation isn’t always smooth, but, if Bedford and the “parents” have trained their children well, they should like what they see in the mirror.