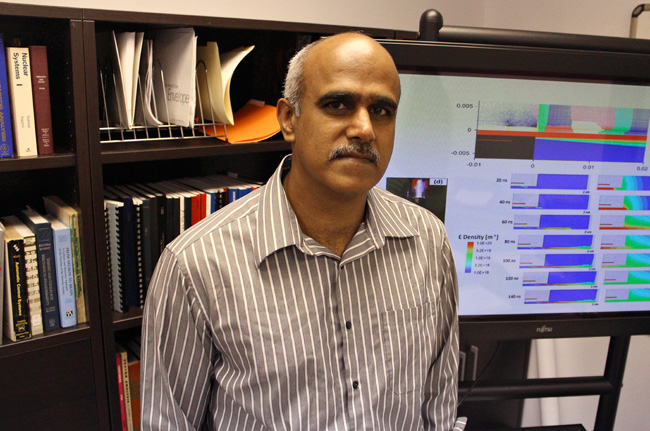 A $1.4 million investment from the U.S. Department of Defense will go toward a Cockrell School of Engineering professor’s research to further understand the properties of plasma.

Laxminarayan Raja, an aerothermodynamics and fluid mechanics professor, researches the different components of plasma and how they relate to the study of aerospace and the engineering of spacecrafts. Plasma is considered the final state of matter.

“You take a block of ice and when you heat it, it becomes liquid. Heat it a little more, and it becomes gaseous. And plasma is when you take that gas and heat it even more,” Raja said.

Raja, who studied in India and later moved to the U.S. to attend graduate school at Texas A&M University, said this grant money will expand his research into new areas that have not been previously studied.

“This is a research area that is potentially going to be very important in going forward in the future,” Raja said. “Not many engineers work with this type of research, and I’m actually one of the first who are starting to do so.”

Noel Clemens, department of aerospace engineering and engineering mechanics chair, said Raja is a valuable contributor in the field of engineering, specifically in plasma research.

“[Raja] is an expert in plasma modeling … and very innovative,” Clemens said.

Vivek Subramaniam, an aerospace engineering graduate student, said he worked with Raja for a year and learned important skills from him.

“His research is genuine,” Subramaniam said. “There’s so much research already done specifically in this area that he focuses on doing something new by connecting these ideas in a way no one else has thought of.”

Raja said studying plasma is important because it can further the understanding of technology in everyday life.

“Fluorescent lights, computer screens and cell phones all are possible because of plasma research,” Raja said. “They are important because we use them every day.”