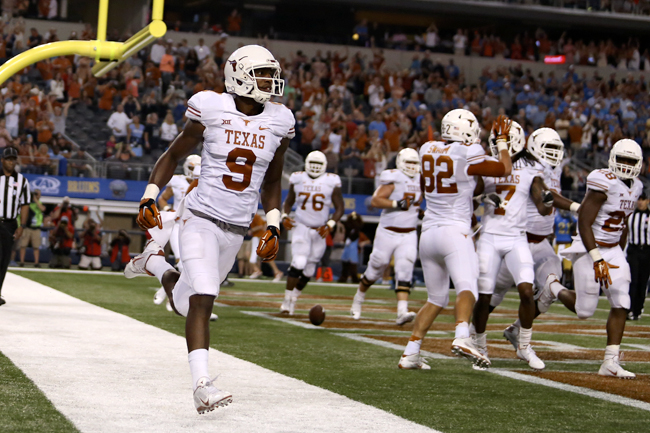 One of the great things about the Big 12, or any of the six power conferences in college football, is that no matter how poorly one team performs in non-conference play, there is still a shot at a BCS bowl game.

And this year’s group of Longhorns knows that better than most.

Last year, Texas started off the season 1-2 after humiliating losses to BYU and Ole Miss. Eleven weeks later, after winning seven of their eight Big 12 games, the Longhorns found themselves in the de facto conference championship game against Baylor. Of course, the Bears went on to win that contest and the Big 12 crown, but to think the Longhorns were even remotely close to a BCS bid after such a terrible start is remarkable.

Now, a year later and under new management, the Longhorns find themselves in the exact same position. After opening the season with a win over North Texas, Texas lost back-to-back contests to BYU and UCLA and will enter conference play with a losing record yet again.

The coaching staff may have changed, but the mindset is still the same — forget about the first three weeks and realize it’s a new season.

“The thing is that, when we come back up for that bye week, conference play again,” head coach Charlie Strong said. “So now everything counts. We just got to pick ourselves back up, and you just got to know how to handle adversity.”

Strong enjoyed a perfect 3-0 start at Louisville this time last season, but, for the majority of his Texas players, this kind of adversity is all too familiar.

“We are just going to keep fighting and try to get it back on track just like we did last year,” senior wide receiver John Harris said. “We will try to get into Big 12 [play] and get a Big 12 title. Get back to those 30 minutes [away from a title] like we were last year against Baylor.”

The Longhorns have this week off before heading to Lawrence, Kansas, next Saturday to open their conference schedule against the Kansas Jayhawks.

The matchup with Kansas may be an easy opener, but bouncing back from a rough start will be even more difficult this year than it was in 2013. Last year, the Longhorns reeled off six straight victories to open conference play, but only one of those came against a ranked opponent. This October alone, Texas takes on No. 7 Baylor, No. 4 Oklahoma and No. 20 Kansas State.

Strong’s bunch has showed promise at times this season, but they’ll need to be much better over the next few months if they hope to put themselves in a position to
contend for a Big 12 championship again.

But the Longhorn veterans have done it once before, and they’re confident last year’s feat can be duplicated.

“We’ve got to lead by example,” senior defensive back Quandre Diggs said. “All that talking goes out the window. It’s time to lead by example and go out and do what I’m supposed to do, and [the team] will follow.”