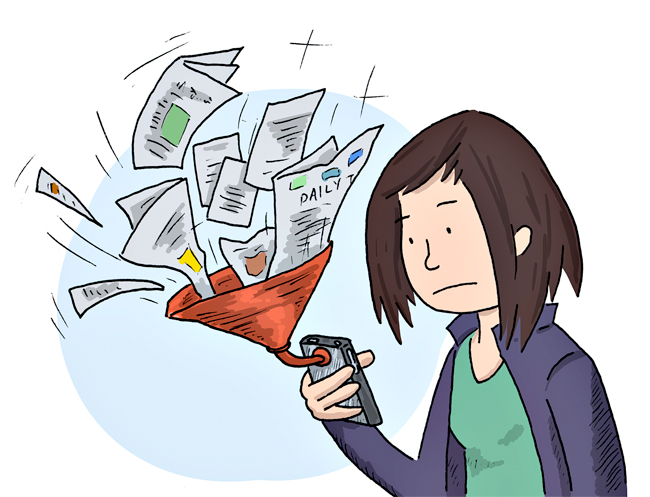 According to the 2013 State of the News Media report, 18- to 24-year-olds have the lowest percentage rates of active news readership. In 2012, 23 percent of college-aged U.S. citizens read the news, and, if the millennial generation continues to stay on trend, that rate will remain — if not decrease.

Created two years ago, theSkimm is a free daily email newsletter that breaks down the top news stories of the day — from major stories, such as the fight against ISIS, to less publicized stories, such as new drugs to combat hepatitis C — in easy-to-understand, everyday language. It acts as a tool for people who want to keep up with the news but do not have the time.

Caroline Meyerson, a marketing and Plan II junior, became a Skimm ambassador for the UT campus after she was introduced to the company by her older sister a year ago. Meyerson said keeping up with current events is crucial for internships and interviews. With theSkimm, she said she feels prepared to discuss the news and participate in discussions with professors and potential employers.

For sophomore Eleni Demeris, theSkimm is part of her morning routine.

“It’s definitely my starting point, and, if I want additional info on what they’re talking about, I’ll go to a larger news outlet,” Demeris said.

While theSkimm is not only for students, it is targeted toward millennials.

Clark wanted to be an ambassador after hearing about the company at a presentation last fall while in Washington, D.C., for UT’s Archer program. Through her work on campus with theSkimm, Clark said she’s seen more students cultivate a passion for news and current events.

She recalls a student who was the only one in his class who could answer his professor’s questions on current events because he read theSkimm daily.

According to Clark, while options like theSkimm only provide short summaries of the news, they are significant in that they allow students to feel like they can participate.

“If everyone on campus read it, we’d be a smarter campus,” Meyerson said.