Where are they now: Texas LB Britt Hager 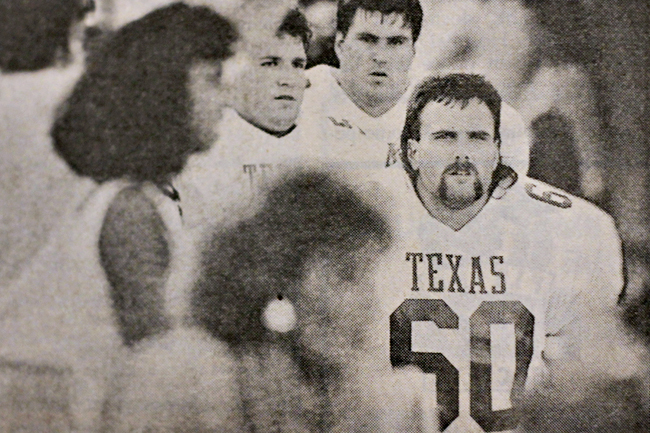 Editor’s Note: This is part of a weekly series looking back at past Texas athletes and where they are now. This week features former linebacker Britt Hager, who played for Texas from 1986-1988.

“Hager was [the Big Man on Campus] when I entered Texas in 1987,” former UT student Brian Combs said in his online blog in 2009. “I remember riding the UT Shuttle Bus with him a few times. He was a big, scary looking man.”

Hager, who sported a Fu Manchu mustache, didn’t just scare Combs and opposing defenses, though. Legend has it that he got so pumped before games he even scared his teammates.

“It’s an honor,” Hager said. “I know how many great players have gone through there since me. To still have that record is still a great honor.”

The All-American’s football career continued after he graduated from Texas. The Eagles drafted him in the third round, and he played nine seasons in Philadelphia, Denver and St. Louis. But, after that ninth year, Hager decided he needed a year off.

After that break, he went to work out for the Chargers and was offered a contract for the 1999 year. But he turned it down.

“[I was] ready to get on with life,” Hager said. “The NFL was hard to manage emotionally and physically, but I wouldn’t trade it for anything.”

Life for Hager didn’t calm down after his football career, as he wasted little time diving into the business world.

He started off at Mattress Firm, a company he invested in while playing. After working his way up to regional manager in six years, he decided to move on.

“I learned on how to grow and operate a business,” Hager said. “I parlayed the techniques over to the next thing.”

That next thing was opening up the first 1-800-Pack-Rat in Texas in 2005. He stayed there for six years before selling it back to Waste Management.

His business career kept rolling when he started Beetnik Foods, an online food company, from scratch with another investor. Now, he is involved as an investor and adviser, watching as his management team grows the company.

“As you build and learn it’s kind of like you learn a fundamental model,” Hager said of his business ventures. “You take that model to that business and try to follow your interest. Oil and gas is going back to where I grew up in Odessa.”

Hager’s biggest enjoyment in life comes from watching his four sons thrive, as all of them received football scholarships. His oldest played for North Texas, while another played for Blinn College. Another of his sons, Bryce, is tormenting Big 12 offenses for Baylor as a fifth-year senior. And his youngest, Breckyn, is a two-star high school senior working to decide on a college now.

“It’s hard to tell [where he will go] because he emotionally loves both of them,” Hager said of his son’s decision. “He’s my only son that looked at me and said, ‘I’m going to beat your tackling record.’”