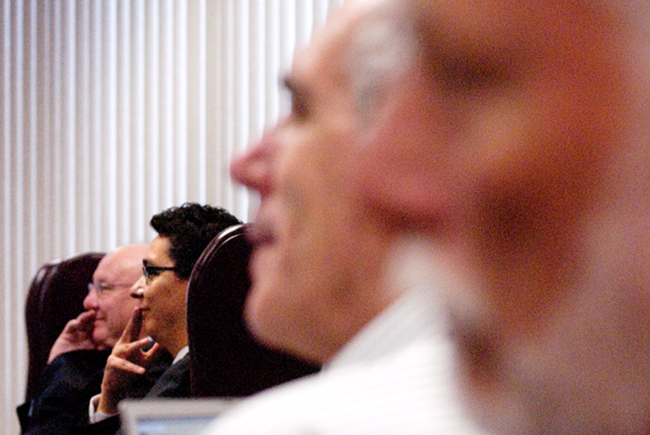 Editor’s Note: On Tuesday, the Texas Board of Education heard testimony from a number of educators who voiced objection to a proposed set of history textbooks. Over the summer, a number of history graduate students from UT participated in a review of these textbooks and found them severely lacking in many areas. Below, we have printed the thoughts of one of our columnists; to view the opposing viewpoint of one of the reviewers, click here. This is part of our weekly Point/Counterpoint series.

Sparks flew in Austin on Tuesday as over 50 educators lashed out in response to a proposed set of history textbooks. The new books have drawn criticism from some who say the materials are “biased and misinformed”— and more concerned with meeting 2010 TEKS guidelines than providing students with accurate information. However, research from the Texas Freedom Network Education fund suggests otherwise.

Despite the pressures TEKS places on public education throughout the state, however, recent research from the Texas Freedom Network Education Fund actually counters what many academics are loathe to admit: Educators have access to an ample spectrum of textbooks in both quality and content. And rather than blaming the system, responsibility can be placed on the educators themselves — who have every right to choose objective texts over ones polluted by biases.

Board members will vote on the new books in November, and if approved, will be implemented in classrooms starting as early as 2015.

The agenda of the textbooks has been questioned by both sides. “There is a relentless glorification of the American free Enterprise System,” says Jacqueline Jones, history department chair at The University of Texas at Austin. The text is “skeptical of government programs of any kind,” and at times portrays them as “misguided.”

Others find fault with misrepresentation of Islamic religion and false portrayal of violent political histories. In one example, the word “jihad” is improperly defined — in another, the textbook looks favorably upon Cuba’s communist history.  “Our students deserve textbooks that are historically accurate; not politically correct,” said former history teacher Amy Baker.

It is impossible to overstate the importance in freedom within one’s education. At such a young age, students should certainly be free to explore these ideas from bias, or pre-imposed ideological values.

But I am here today to argue that regardless of TEKS History standards, the ultimate choice is still held at the hands of the educator.

In response to this ideological dispute, the Texas Freedom Network Education Fund recently conducted a study reviewing textbook accuracy at each level, and weighing it with compliance to TEKS. And though there were indeed materials that bowed completely to TEKS requirements, the researchers also found that many materials simultaneously met state requirements while maintaining respectful distance from endorsement of any kind. For each source that researchers noted was written with conservative, capitalism-touting undertones, for example — existed a balanced and objective counterpart.

But the hyper-polarized academics on both sides of the political spectrum won’t want you to see that.

This “textbook debate” is not nearly as black-and-white as highfalutin academics insist. And in actuality, TEKS leaves more breathing room for publishers than some would have you believe — the abundance of informative and unbiased choices are solid proof.

Texas also has a large influence on the national textbook market — weighing in at about 48 million textbooks per year, we yield one of the largest market clouts in the country. Publishers nationwide scramble to supply the needs of such a readily-consuming state. And educators, therefore, are never at a loss for an ample arsenal of supplies to choose from.

In fact, school districts are free to choose materials that are not approved by the board — they are even free to buy them with state money. This freedom of choice, coupled with an abundance of eager publishers, ensures a market that is much too large to be engulfed by ideological persuasion. “A good teacher will know how to take advantage of this situation,” says Kirk White, a middle school social studies teacher in Austin.

Are there examples that tout flagrant ideology and factual misrepresentation? Yes, and one would be hard-pressed to find a field that doesn’t yield this type of misinformation. But what’s more important is the ample amount of viable alternatives for educators to choose from. Textbooks range enormously in fact and quality — and despite the restrictive TEKS requirements, a comprehensive and quality education can most certainly be achieved.