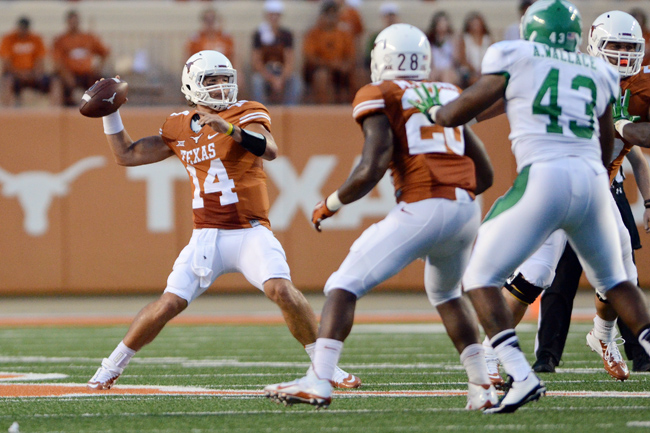 “We just decided because of his health, which was always critical and the number one concern for us, that he’s no longer going to play,” Strong said. “But he’s still going to be around the team, because he deserves to be on this team and around this program.”

Ash, who earned a medical redshirt in 2013 after missing 10 games because of concussions, returned this summer to his team and was named the starter for the 2014 season. In the season opener against North Texas, he completed 19-of-34 passes for 190 yards. He recorded both a passing and rushing touchdown, playing the entire game despite taking a hard hit in the first quarter. Later that night, Ash called the trainers with concussion-like symptoms, which sidelined him for Texas’ next two games.

“We’re always concerned about a young man’s health and will never jeopardize his health for the good of a football team,” said Strong in a Sept. 1 press conference after announcing Ash as out “indefinitely.”

Though few believed Ash would return, his decision was not official until Wednesday. Strong said there was “no way” they were going to let Ash back on the field after his history of injuries, but he thinks it’s important Ash remains a part of the team.

“It’s a very tough call for him,” Strong said. “He’s very emotional — done a lot for this program, been a major part of this University. Any player you’d like to finish his career — that’s why they sign up to be a part of something special. What’s important is that he feels a part of this and [doesn’t feel] like he’s been pushed aside.”

Ash finishes his career with 22 starts, 385 completions and a 62.8 percent completion rate. He threw for 31 touchdowns, tallying 18 interceptions, finishing with a quarterback rating of 138.41. Now, Ash will continue to attend practices, team meetings and potentially travel, Strong said. He will help younger quarterbacks, acting as a coach on the team.

Sophomore quarterback Tyrone Swoopes took the starting job after Ash’s injury and will continue to start for the Longhorns, with redshirt quarterback Jerrod Heard assuming the backup position. Strong said he has not decided whether they will burn Heard’s redshirt — guessing it will be a game-time decision.

Senior defensive tackle Desmond Jackson will also undergo possibly season-ending foot surgery and could potentially apply for a medical redshirt at the end of the season.