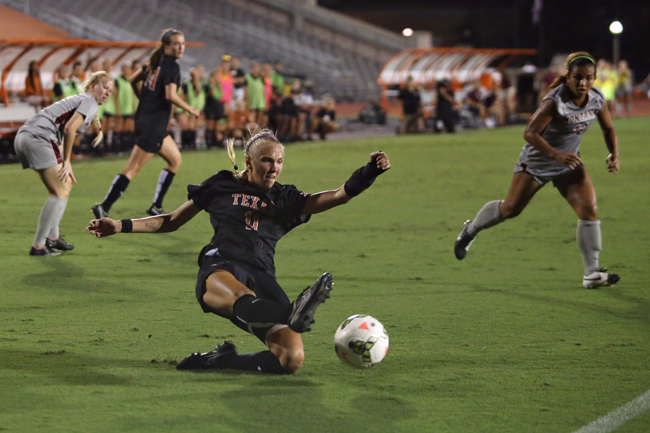 A pair of losses on the road this past weekend put a halt to the women’s soccer team’s otherwise promising start to the season, and it won’t get any easier this weekend when the reigning NCAA champions roll into Austin.

No. 1 UCLA (6-0-1) will be the first test of the weekend on Friday at 7:30 p.m. before Texas heads down the road to San Marcos to take on Texas State (4-2-1) Sunday at 7 p.m. The games will give the unranked Longhorns (4-2-2) a chance to halt their current skid and vault them into consideration for a top-25 rank. Or, very easily, they could continue the skid and make their uphill climb much more difficult.

“I believe at any given moment, [the Bruins] have eight senior starters that have played internationally,” head coach Angela Kelly said. “We will pursue the best talent in the country, and if UCLA is the reigning national champion, then we want to use this game as a litmus test and go after it.”

The defending champion Bruins are riding a surge that started early last season and shows no signs of stopping. UCLA’s last defeat came 29 games ago when the team lost a 1-0 match on the road against North Carolina over a year ago.

At first glance, UCLA senior goalkeeper Katelyn Rowland appears to have been the driving force behind the Bruins’ success in the early going. The national team stalwart has recorded 638 consecutive minutes of shutout ball this season and holds the UCLA record for career shutouts with 42.

However, Rowland may not even be the most feared aspect of the Bruin defense. That title goes to the UCLA defenders, who have allowed a mere 18 shots all season, with only five of those on goal.

If the Longhorns do have a silver lining in their matchup against the best defense team   in the nation, it is the Texas offense, led by freshman forward Olivia Brook and senior defender Brooke Gilbert; it has had no problems creating shots recently. Even in last weekend’s shutouts, the team managed 14 shots in each game.

The Longhorns appear poised to take on the challenge despite being massive underdogs.

Texas State is no UCLA, but the Bobcats have put together a solid showing early on and their defense has only allowed five goals all season. Texas State is undefeated at home, which does not bode well for a Longhorn team that has struggled on the road this season.

Kelly, though, does not appear worried about her team’s early road troubles.

“It would be similar for any squad,” Kelly said. “It’s just not as much of a controlled environment, but any high-level quality player is used to those types of things.”