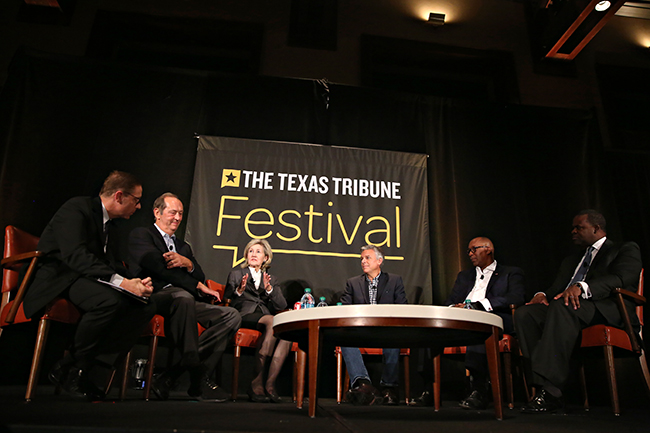 Panelists discussed the current state of American government and the influence of  extreme partisan divides at the "Can the Center Hold?" keynote discussion at the 2014 Tribune Festival on Saturday.

While the panelists have varying backgrounds and levels of experience in politics, they all agreed the current system of government is broken.

Bradley said the problem with today’s government is the partisan division in Congress.

“I don’t know a president who isn’t thinking like an executive,” Bradley said. “They want to get things done. The problem is Congress. You will never defeat power except by power.”

According to Hutchison, who currently serves as president of the Texas Exes alumni association, the party division in the Senate poses a problem.

“I think it is the polarization and the toxicity,” Hutchison said. “I think the Senate, which was very carefully crafted to be the adult in the room in the whole balance of powers, has lost that role. One of the things that protected that was, and this is a different issue, was the two-thirds rule and the 60 percent rules, where you really couldn’t do anything without a supermajority.”

According to Reed, the national division that exists between parties is not as prevalent on smaller governmental levels, making city government positions ideal for individuals who want to see action.

“The kind of hyper-partisanship that goes on nationally is not happening in cities, thank goodness,”  Reed said. “Because of that, you’re going to see more highly talented people put their energy and their passion into cities.”

According to Huntsman, who ran for president in the 2012 race but said he has no presidential aspirations for 2016, Congress' mentality needs to mirror that of city government.

“I would say part of our longer term fix is how do you change the culture, the ethos on capitol hill from anger, animosity and acrimony to problem solving?” Huntsman said. “In order to do that, you have to infuse in people who believe in problem solving and then give them something to do.”

Kirk said he thinks the rise in prominence of social media has caused a shift in political culture.

“I think the explosion of social media changes everything,” Kirk said. “We now all get a peek behind the curtains that we didn’t get before – giving more strength to those who are villains.”

Kirk also said the country ought to have a third, moderate party.

Reed said he is optimistic that change will come.

“Just about every great revolution in the world was started by someone in their 20s or 30s,” Kirk said. “It wasn’t a bunch of 60-year-olds sitting around pontificating about how life used to be.”