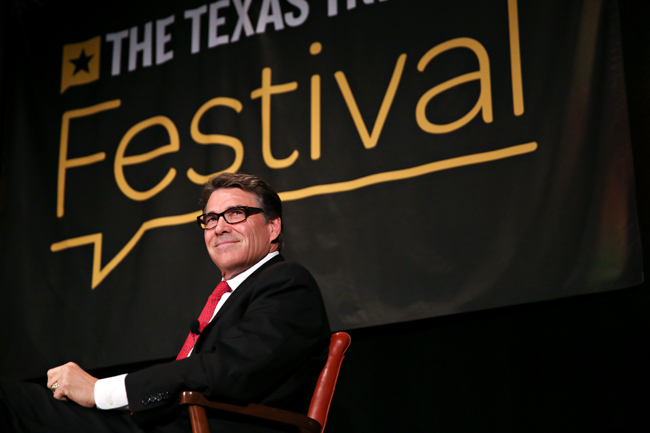 In an interview with Evan Smith, Texas Tribune CEO and editor-in-chief, Perry repeatedly refused to answer any questions about his Travis County grand jury indictment. When Smith jokingly threatened to stop asking questions and sit in silence, Perry said he was fine with that.

Public education has been adequately funded by the state legislature, according to Perry.

“I don’t judge progress by how many dollars we spend,” Perry said. “I think it’s simplistic to say you’re not spending enough money. I suggest the result is hard to argue when you look at the number of kids going to college today and when they got a job out of school.”

Perry also said he still supports providing in-state tuition for undocumented students, and it should be no issue for the Texas Legislature to aid students in earning a higher education degree.

“I think it’s important for young people to move up, get that certificate or diploma,” Perry said.

Perry defended his stance against the Affordable Care Act.

“I’ve asked Washington multiple times for more flexibility to deal with the issue of health care and how we could receive the money from D.C. and restructure these programs so more people could have access,” Perry said. “In 2009, President Obama said Medicaid was broken, and I agree with him. So why would we want to expand a broken system?”

The Veterans Affairs hospitals around the country exemplify the future of government-run health care, according to Perry.

“The VA is a debacle,” Perry said. “I think one of the ways you fix health care is [to] get Washington out of the regulatory side of it and to allow the state to run it. Just like expansion of federally funded health clinics. Making access to health care is the real challenge here, not government-forced insurance.”

Although he is largely satisfied with his 14-year run as governor, Perry said he regrets his handling of his 2007 vaccine mandate for HPV.

“I would have done it differently,” Perry said. “I would have engaged the public more. I thought the public understood this from the standpoint of a cancer. The execution was wrong. I was thinking out my heart instead of my head, and I want to make the people of Texas be more engaged. We’re not executive order types.”

Citing his run in the 2012 presidential election, Perry said he has not yet decided about another presidential run.

“I went through a very humbling and frustrating process in 2011 and 2012,” Perry said. “I was not prepared. It was obvious. I may or may not run for presidency, but, in order to give myself that option, you have do the work that is required.”

Perry reiterated his support for UT System Regent Wallace Hall and said the legislature should allow the Board of Regents to conduct its business unimpeded. He also defended his signing of House Bill 2.

Displaying a chart showing job growth in Texas, Perry also spoke about how the Texas Enterprise Fund — an incentive program that encourages businesses to come to Texas — has aided economic growth for the past decade.

“We became very good at economic development,” Perry said. “It took a while — [when] Boeing deciding in 2001 to move their corporate headquarters they chose Chicago instead of Dallas, they didn’t think the cultural arts were as expansive in Dallas as in Chicago.”

Since then, Perry said, cultural arts have exploded in the state’s major cities. Perry said, although the program has benefited Texas, it is up to the legislature to discuss the lifespan of the incentive bill and see whether it should continue.

“I think if they want to change them, if they want to unilaterally get out of the economic development business, that’s their call,” Perry said. “But, I would suggest over the last decade, we have been successful in large projects and small projects.”

“There were parts where he was being humble, and he’s not known for being humble,” Hodges said. “But when he dodged the whole hypocrisy question, I thought that was kind of pathetic.”

“I’ve interviewed him many times over the past years, and I thought this was the most relaxed I’ve seen him,” Smith said after the interview. “We’ve had some contentious interviews over the years. I would have liked to talk more about the indictments, but I understand he was constrained by the legal process.”