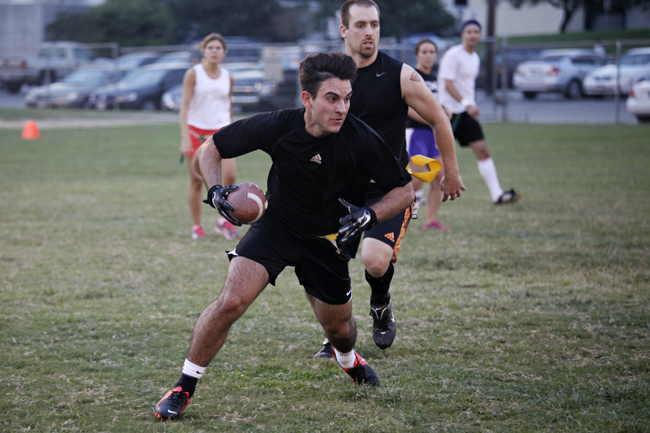 A losing Texas Longhorns football team may not only affect game attendance but also registration for intramural flag football, according to a Division of Recreational Sports official.

Between 2011 and 2013, the number of total registered teams for intramural flag football in the fall decreased 12.9 percent, from 387 to 337, according to Rec Sports. As of Monday, there are 284 teams registered for this season. Darci Doll, senior assistant director for Rec Sports, said the registration deadline has been extended to Friday to give teams more time to sign up.

Doll said the highest number of flag football teams in recent years was 416 in fall 2006, a few months after Texas’ national championship win at the Rose Bowl.

“When the campus community is excited about a certain sport, they want to be involved in it as more than just a fan,” Doll said in an email.

In an interview, Doll said, while fall flag football registrants have been declining, the popularity of intramural soccer has been increasing over the past four to five years. The number of total registered fall soccer teams has increased 5.2 percent, from 232 in 2013 to 244 this season, and is still rising, according to Doll.

Doll said the growth in soccer registrants could be a result of both the popularity of the summer’s FIFA World Cup in Brazil and the increase in prevalence of the sport across the state.

“We see more students who have enrolled in UT who have played recreational soccer all their lives,” Doll said.

Men and women are exposed to soccer more equally, Doll said, unlike football, which is primarily played by men.

Doll also said the decline in number of flag football teams could stem from the addition of a spring intramural football league. Since the league was first piloted in spring 2013, registration expanded from 64 teams to 96 teams by spring 2014, according to Doll.

“Since students [know] they could play again in the spring, they may be playing on fewer fall teams,” Doll said.

Chad Zimmerman, a Rec Sports graduate assistant, said the number of flag football registrants could also be affected by this year’s increase in registration fee from $100 to $120, but, since the fee increase applies to all sports, it should be affecting more than just flag football.

“If it were really a decrease because of the fee, then you would think it would be an even spread across all sports,” Zimmerman said.

Nicholas Hodges, an intramural supervisor and flag football referee, said the fee increase could have a larger effect on students who play on multiple teams. He said this may cause students to opt to play on only one team to avoid paying more money.

Hodges said he also thinks changes to parking could be affecting flag football team registration this semester. People who park at Whitaker Fields, where students play intramural football and soccer, are now required to have a University parking pass at all times, whereas, in previous years, parking was free after 5 p.m.

“For me, I have a car, but I don’t have a parking pass,” Hodges said. “I don’t want to buy a parking pass just so I can ref. If I want to have a team, I have to think about, ‘Oh, can my whole team get there? Do we all have parking passes?’ And so that’s my main issue.”