Despite his slow start, teammates, staff still confident in Reed 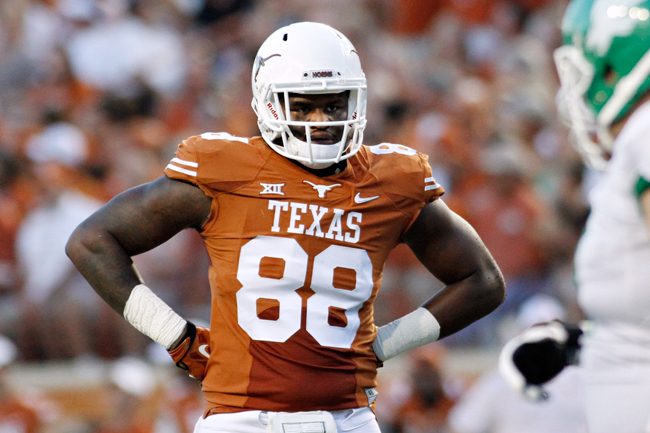 Before he’d even played a down in 2014, senior defensive end Cedric Reed was one of the hottest players in the country.

A consensus preseason All-American and one of the favorites to win the Ted Hendricks Award, given to the nation’s top defensive end, Reed was expected to break out of former teammate Jackson Jeffcoat’s shadow and lead a stout Longhorn defense this year.

Instead, just a month into the season, that narrative has taken a turn for the worse. Through three games, Reed has recorded just five solo tackles, 0.5 sacks and one tackle for loss — disappointing numbers from such a highly touted veteran.

The slow start has many questioning whether Reed, who had 10 sacks, 18.5 tackles for loss and five forced fumbles as a junior, deserved all the preseason hype.

Despite all the doubters on the outside, those within the Longhorn locker room are still confident in Reed’s ability to produce at an elite level.

“He has not been a disappointment,” head coach Charlie Strong said. “He’s playing well enough for us. I’m not getting caught up in the numbers.”

Senior corner back Quandre Diggs, who has been through three defensive coordinators with Reed at Texas, echoed Strong’s sentiment and stressed that the statistics don’t tell the whole story.

“The thing is, it’s not just sacks with him,” Diggs said. “He’s staying in his run gaps, taking care of responsibilities. I think a lot of people expect him to go out and have monster sacks, but he’s getting doubled and things like that.”

As the biggest threat along the defensive line, Reed has been getting extra attention from opposing offenses. Whether it’s a double team or an offensive lineman getting help from a tight end or running back, opponents are making it as tough as possible for Reed to get in the backfield.

“That’s how it is when you’re a big-time player at defensive end,” Diggs said. “They are going to double you, chip you and do anything they can do to get you away from the quarterback.”

Reed, a native of Cleveland, Texas, can take some comfort in that he didn’t get off to a flying start last year either.

Through the first seven games of 2013, Reed had just three sacks before bursting onto the scene and recording seven sacks and 11 tackles for loss over the final six games of his junior campaign.

“[Reed] still has nine games to play,” Strong said. “It’s still too early to evaluate what teams are doing to him. It’s all about everybody just picking up their play and playing better.”

Just a few games into his first season at the helm, it appears as though Strong is hoping to get a better read on his team in conference play.

He’s hoping to get a better Reed, too.