Powers’ final State of the University augurs ill for UT 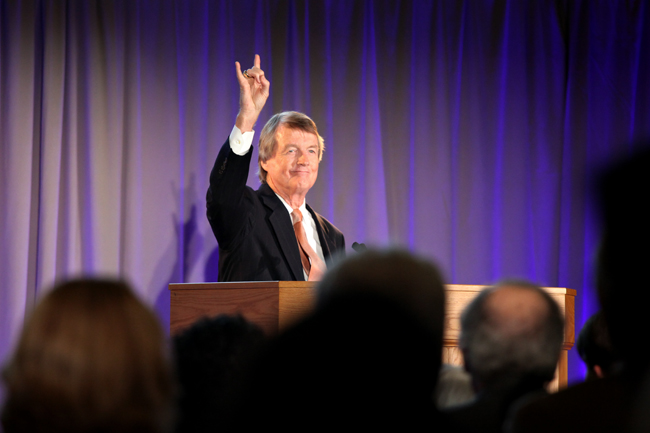 When President William Powers Jr. stepped up to the lectern Monday to deliver what would be his final "State of the University" address, I felt a mix of sadness at the end of an era, but eagerness to hear his vision for the future of a university that finds itself positioned to lead the way in reimagining the future of public education in the 21st century. I have not always agreed with his policies, but I have always considered Powers to be a thoughtful, determined leader who was doing his best to protect the future of our great University in very difficult times. Unfortunately, much of what he said Monday disappointed and even frightened me.

Part of what makes our University great is its community of scholar-teachers in an enormous range of disciplines. As a community, we value expert knowledge and we recognize that scholarship and teaching are in constant dialogue with one another. Our research informs our teaching and benefits our students; our time in the classroom, engaged with students at all levels, informs our research — often in unexpected ways.

These days, a lot of my time is spent on building and running for the first time a fully online version of my Introduction to Ancient Rome class and on talking and writing about my instructional design and pedagogy work. Over the past year, more of my time has gone to activities that, at first glance, would seem to fall under the heading of teaching. In fact, I’d argue, these activities are simply a less traditional and more pragmatic form of research and publication that directly and immediately benefits my students.

As a public university in an age of budgetary austerity for education and increased debt loads for students, UT Austin finds itself at a crossroads. Money is tight. Disciplined decision-making is required. Yet Powers' notion that we can and should unbundle teaching and research may well be the undoing of our great University. The proposed plan to designate some departments as “teaching” departments, staffed primarily with untenured lecturers, and others as “research” departments staffed with tenured/tenure-track faculty is potentially catastrophic and, even if quickly abandoned, will have long-term consequences in things like external rankings. Tenure is not merely a bargaining chip to use in hiring faculty in disciplines with a private sector; it is the thing that lets me write this op-ed without fear of losing my job.

I agree that the UT Austin of the near and distant future will, by economic necessity, rely more on full-time lecturers. I understand that tenure has its downsides, particularly in a fast-changing world. A tenured faculty makes it more difficult for an institution to be nimble and responsive. The solution is not, however, to de-tenure the instructional faculty in fields that are viewed as less relevant to the core mission, to treat those departments and their faculty as second-class citizens in the University community. As we all know, what is viewed as relevant today may well be obsolete in a decade.

Let me offer an alternative vision. Shouldn’t the goal be to ensure that tenure is awarded to those faculty who will change with the times, who will constantly be improving their skill sets, both as scholars and as teachers? Why not institute a system of incentives that rewards this behavior? Why not do more to incorporate emeritus faculty into the University community so that retirement does not also mean separation from a job that was their vocation for many decades? Why not help departments think strategically about how to deliver a high-quality curriculum more efficiently (e.g. by developing some number of online courses)? My vision of UT Austin’s future is not one of ghettoized lecturer-staffed departments that operate in the shadows of the well-funded core departments. That simply is not a university of the first class. Devising and implementing creative solutions at a university the size and scale of UT Austin is not easy. But we cannot settle for the easier but far more damaging solution of picking winners and losers and hoping for the best. Our students deserve better.

I was delighted to hear that Powers includes Sophocles’ "Oedipus Rex" as part of his UGS 302 Signature Course, "What Makes the World Intelligible." The dramatic action of the play hinges on a series of misinterpretations and bad choices by Oedipus. Despite going to great lengths to avoid fulfilling a prophecy that he will kill his father and marry his mother, he does both of those things and brings a plague upon the city he rules. The play ends with his mother/wife Jocasta hanging herself and Oedipus gouging out his eyes with her hairpins. Oedipus did everything he could to avoid his fate, but he made deeply flawed choices — one of which was to refuse to listen to the seer Tiresias. Oedipus shows us just how difficult it is, as mortals, to see and understand the future, even when we go to great lengths to determine it.