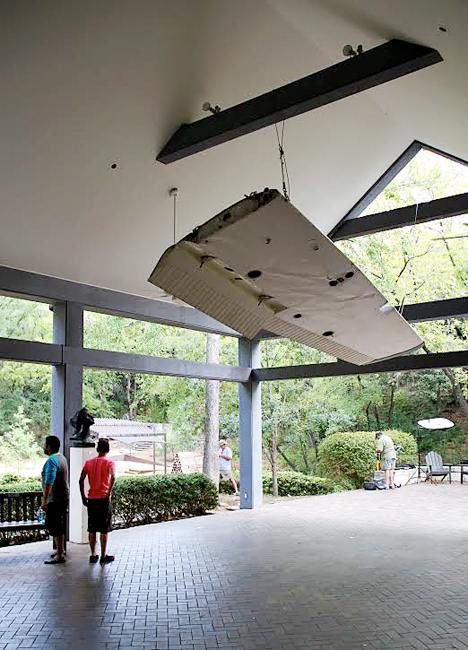 Everyday spaces are filled with the most inspiration, according to studio art graduate student Adam Crosson. Crosson’s solo exhibition, “Intermodal,” opened earlier this month at the Umlauf Sculpture Garden & Museum. Crosson was awarded the Umlauf prize, which included an exhibition and a cash prize.

Currently on display outdoors, Crosson’s pieces are large and, at times, ambiguous. Crosson said he developed the concept of “transit spaces” during his daily commute to and from school.

“[Transit spaces] are this kind of forgotten about thing with important functionality,” Crosson said. “It’s kind of pulling [a] fragment of that unseen system into a space of a museum at a human scale.”

“Intermodal” features pieces such as a suspended airplane wing, a freight container and several other large installations. Crosson said he was inspired by airplanes, airports and their presence in the media. Air catastrophes, particularly Malaysia Airlines Flight 17, had a personal impact on Crosson and the ideas he carried into his work.

The title of his exhibition, “Intermodal,” is derived from intermodal freight transport, which is a method of moving freight around the world. The freight container featured in the exhibition was constructed in China and, according to Crosson, participated in many international deliveries.

“If you inhabit that space, you can tell it is haunted by the freight that was once in there,” Crosson said. “I think my work pulls from outdoor, urban settings often, so the material palette was there, and, in a lot of ways, the challenges kind of fueled further conceptual exploration.”

Umlauf executive director Nina Seely said the Umlauf prize is one of the most exciting programs at the museum because of the opportunities it offers. Damian Priour, late sculpture artist and Umlauf board member, created the prize to support UT students and allow them to share their work with the community.

“Damian Priour would be so proud to see what we have done with the prize and what Adam Crosson has accomplished through the Umlauf Prize,” Seely said.

Crosson’s concepts and experimentation with new materials are what caught Suzanne Deal Booth’s eye. Booth, a philanthropist and art historian serving on several fine arts committees, worked closely with Seely to select the winner of the Umlauf Prize.

“I had no idea students were doing such interesting and diverse things,” Booth said. “Narrowing it down to [Crosson] was really as if his work had just expanded into another place, and that we were the first ones to stumble into it. Almost a moment of discovery.”

Correction: An earlier version of this article incorrectly identified Damian Priour as a former UT sculpture professor. It has since been updated.