A night in the life of a student Lyft driver 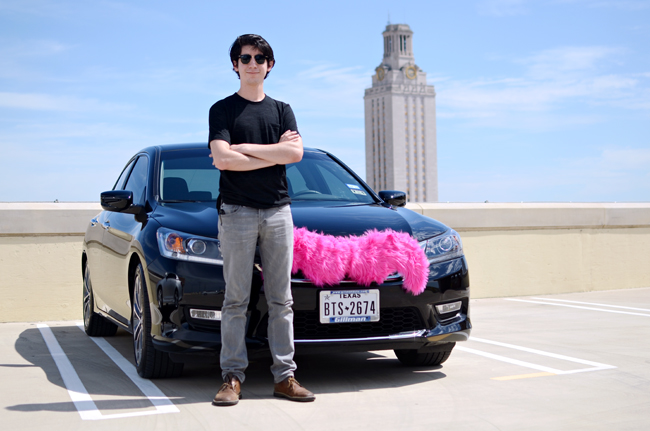 Cris Nevares’ nights as a Lyft driver are never the same. Since becoming a driver last summer, Nevares has come across a variety of people, stories and situations on the job. Each ride has a story of its own, whether it lasts five or 45 minutes.

Nevares, a mathematics and actuarial sciences senior, began driving with Lyft because it allowed him to choose his own hours, leaving time for studying.

“I heard it was decent money, and the entire ‘being able to make your own hours’ thing was pretty appealing,” Nevares said.

He starts most of his driving shifts around 6 p.m. and will sometimes drive until 4 a.m. His car is equipped with bowls of candy, water bottles, throw up bags and even condoms for patrons.

Saturday night, Nevares’ phone lit up, signaling his first request. The request came from a man named Rohan and his wife, a couple visiting from New York. Nevares can only see customers’ first names on the app.

Nevares picked up the couple in West Campus and began making conversation as he drove them to East Austin. They explained that they had just finished eating at Franklin Barbecue and said they traveled to Austin mainly for the food.

Nevares dropped off the couple and said goodbye.

“They’re definitely one of the nicer groups I’ve had,” Nevares said. “On average, the passengers are nice, but they were really awesome. That’s one reason why I feel I don’t have to make myself do this.”

After dropping Rohan and his wife off, Nevares soon received another request on his phone from a man named Jeff in Far West. Jeff was on his way to the Austin Pride Parade downtown. He wore cut-off shorts, a sequined shirt — which he said he made himself — and a hat with a fake mustache glued to the top.

Jeff, a UT alumnus, is a social worker in Austin and was planning to be on a float in the parade. He said Lyft provides him with a pleasant riding experience while keeping him from drinking and driving.

“[Lyft] is so much more convenient and quicker and cheaper than a cab,” Jeff said. “I know someone’s going to come. It’s just nicer. As someone who does not drink and drive, I don’t ever drive my car downtown.”

As Nevares dropped him off at 15th and San Jacinto for the parade, Jeff thanked him for the ride.

“You’re going to get five stars because you are delightful,” Jeff said.

Nevares said he doesn’t mind making connections with people and then dropping them off — he said that’s the fun part of the job.

“I always get to have cool conversations,” Nevares said.

His next pickup was for a man named Mark and his friend, who were also on their way to the Austin Pride Parade. Mark and Nevares talked about the current battle between Lyft and the Austin City Council. One danger Nevares faces as a Lyft driver is being pulled over by a cop and having his car impounded because he doesn’t have a chauffeur’s license.

“If anything, [the police] like Lyft and Uber because it’s less people driving home drunk,” Nevares said. “The people who are really making a fuss about it are the city of Austin and transportation.”

Nevares explained he’s had some odd experiences while driving. Just last week, a drunk man wanted be driven from his home to Whataburger and back. He even offered to buy Nevares food.

The Austin City Council votes today on providing a way for these ride-sharing companies to operate legally in the city. Nevares said he hopes this vote will allow him to keep driving with Lyft.