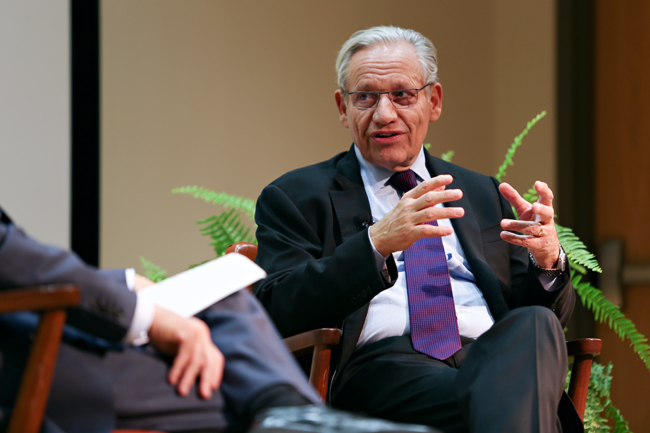 Bob Woodward, one of the reporters who broke the Watergate scandal in 1972, talked about his experiences as a journalist Wednesday at the Belo Center for New Media.

Woodward, now the associate editor of the Washington Post, gained prominence following his coverage of the scandal with Carl Bernstein, in which President Richard Nixon attempted to hide evidence of a break-in at the Democratic National Committee’s offices in Washington, D.C., Nixon
eventually resigned.

Looking back on his experience since the scandal, Woodward said the changing environment for the newspaper industry is something he thinks can be reversed.

“The answer is, ultimately, when you’re in the business, you have to make the product better,” Woodward said. “We used to call them ‘bacon coolers,’ when a story in the paper was so good that when you’re eating breakfast, and you get the bacon on the fork, it never gets to your mouth because the story is so good.”

In a time when social media is often used to spread information, Woodward said it should not be a substitute for accurate and effective reporting.

“If you are spending the time tweeting, you aren’t spending that time reporting,” Woodward said. “Reporting is something where you have to develop relationships and trust with human beings, and you have to talk to people.”

Journalism professor Tracy Dahlby said he agreed with Woodward about the damages of social media, but said that, for people who care about journalism, those distractions would not completely hinder the process.

“I think that there is an issue with social media and digital technologies that we have because they tend to split our focus and distract us,” Dahlby said. “I do believe as Bob Woodward said, all of that is surmountable if you are really interested in a story and really interested in getting to the bottom of it.”

Woodward said the Washington Post ran a story about an 8-year-old boy that was being drugged with heroin by the mother’s boyfriend. After having won a Pulitzer Prize for the story, it was discovered the writer falsified the story.

Woodward said he still considers it to be the biggest mistake of his career.

“Where was I as a human being, worried about this 8-year-old?” Woodward said. “The first thing I should have done, were that to happen now, I’d say, ‘Fine, good story,’ and then I would get a doctor and a cop and go to that address to rescue the kid.”

Wanda Cash, associate director of the School of Journalism, said student journalists have much to learn from Woodward and Bernstein.

“You have to go where the story is; the story is not going to come to you,” Cash said. “What Woodward and Bernstein did after Watergate was to pound that pavement and knock on doors.”