Where are they now: Texas CB Jerry Gray 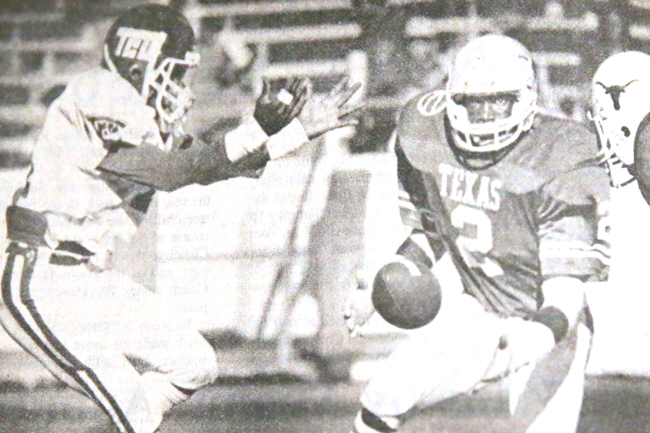 As one of first great cornerbacks to come out of Texas, Jerry Gray helped initially forge the  DBU, “Defensive Back University,” moniker.

Along with being a two-time consensus first-team All-American, he was a two-time Southwest Conference Defensive Player of the Year. He was a first round draft choice in 1985 and a part of the 2013 College Football Hall of Fame class.

But he didn’t just put up quiet numbers; he also made memorable plays. His best was catching Auburn’s eventual Heisman Bo Jackson from behind, with a clean hit that separated Jackson’s shoulder.

Also against Auburn, Gray had a one-handed interception, as he floated in the air backwards to haul it down, making every highlight reel in the process.

He is third in Texas history with 16 interceptions, just one behind Nathan Vasher and Noble Doss. His seven interceptions in 1984 are tied for second.

“There are some things in those four years at Texas that you could never replace,” said Gray last year in his Hall of Fame acceptance speech. “When I see guys who I played with then, it’s like you never really left. That is what football really brings to me.”

And in the NFL, his career continued. He played his first seven years with the Los Angeles Rams, playing in all but eight games. From 1986 to 1989, he was elected to the Pro Bowl as his career began to blossom. In his final Pro Bowl, he even took home MVP honors.

But that NFL career ended in 1993 after one year each in Houston and Tampa, and the next stage of his life began — coaching.

“I had never really thought about it until the Bucs coach at the time, Sam Wyche, offered me a player/coach contract,” Gray said in 2005. “I really didn’t know what it would entail, so I declined and decided to take the year off after retiring from football.”

But he quickly jumped back into it, coaching SMU’s defensive backs in 1995.

Then the NFL called back, as he took a job with the Oilers as a defensive assistant/quality control coach. He worked his way up to defensive backs coach in the Titans’ first season after just two years, and in 2001, he was offered the defensive coordinator position in Buffalo.

“He would study [tapes] of the opposing team’s offense like a coach would,” McWilliams said. “If we were at practice, I could ask [Gray] what the other team would do in certain situations, and he would know, so it doesn’t surprise me that he’s moved up through the ranks.”

Gray came back to Texas in 2011, but just a month later, head coach Mike Munchak and the Titans called to offer him the defensive coordinator position, which he took.

After two years there, they turned over their staff. Currently, he is with the Minnesota Vikings as their defensive backs coach, but he strives for more.

“I’m interested in a head job, and it doesn’t have to be at the professional level,” Gray said back in 2005. “I don’t want people to hire me because I’m a minority; I want to be the guy for the job.”