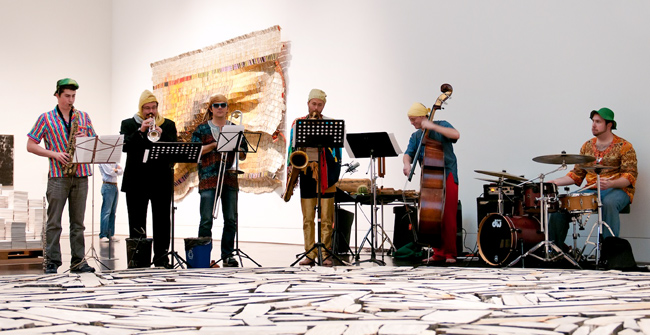 Courtesy of Blanton Museum of Art

The halls of the Blanton Museum of Art reverberate with deep bass notes, acoustic echoes and the fuzzy undertone of white noise. These elements combined create what is called a “sound construction.”

On Sunday, the Blanton will host SoundSpace: Sound Construction, an immersive event that will explore tonal color and texture through a concert and interactive exhibits placed throughout the museum’s galleries.

The exhibition is the eighth installment in the Blanton’s acclaimed SoundSpace program, a series of biannual music events that seek to make ambitious and creative music accessible to the public.

Adam Bennett, the Blanton’s manager of public programs, said Sound Construction will include musical performances that utilize both traditional and unconventional
handmade instruments.

“We were excited about doing a SoundSpace that had interactive elements,” Bennett said. “We thought about how so many interesting composers and musicians had invented new instruments.”

The concert will feature the premiere of “Symmetrographia,” a new work by Austin composer Travis Weller. It is a program-length piece that showcases musicians playing instruments ranging from the viola to two piano wire skiffs. The performance will also feature a sixteen-string instrument of Weller’s own creation.

“The project called for a huge diversity of discrete sounds,” Weller said. “After kicking around some ideas for the piece, I decided to throw all the instruments I could at it to see what happened, but it seemed to be begging to be expanded into a richer, more complex soundscape. That was when I started thinking about this piece.”

Another Sound Construction performer is Dan Lippel, a solo guitarist at the International Contemporary Ensemble, a group of composers and instrumentalists dedicated to experimenting with ensemble performances.

“It is based a lot on the idea of building overtones over a fundamental bass note, something that related directly to the core of Sound Construction — bringing music back to its acoustic principles,” Lippel said.

Philadelphia-based artist Sam Cusumano created a series of interactive, site-specific installations called “Electricity for Progress — Modification.” Cusumano will set up stations in the Blanton’s galleries with modified electronics and toys for guests to interact with.

“I want people to learn about the electronics and systems surrounding them,” Cusumano said. “I try to explore the ways that electricity and electronics function by allowing a listener to ‘hear’ the invisible processes happening inside of circuits. Guests are inspired to create amazing sounds, textures and questions.”