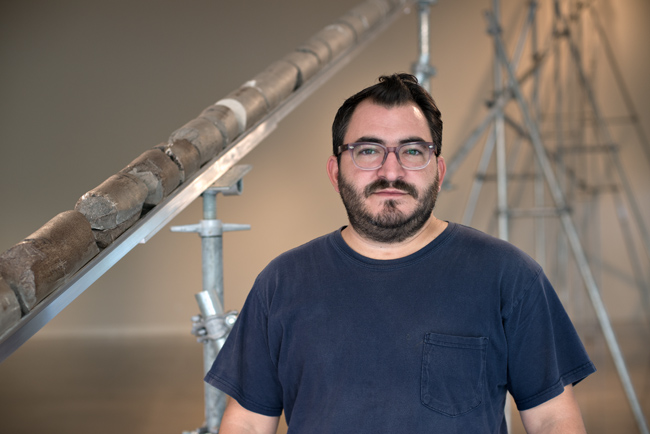 Courtesy of the Visual Arts Center

When walking into the Visual Arts Center Vaulted Gallery, it looks a little like the room is under repair. Building scaffolding holds up a 70-foot long core sample. The sample stretches diagonally from one corner of the ceiling to the opposite ground side of the gallery, where it exits through a hole in the gallery window and reenters the earth.

David Brooks, who has a Master of Fine Arts from Columbia University and works out of Brooklyn, is the Vault Gallery artist-in-residence. His exhibition, “Repositioned Core,” which opened Sept. 19, blends his knowledge of science and art. His artwork highlights the dynamics between individuals and nature and often the disconnection that exists between the two. For example, he placed a section of the tropical rainforest in the Museum of Modern Art in New York to represent his perspective on humans and nature.

Each year, the Visual Arts Center invites working artists to show their artwork at the gallery. During the selection process, faculty determine which artist is invited to work at the University based on their need for resources and desire for collaboration.

“As this is one of the country’s great research universities, this was certainly an opportunity I was delighted to take,” Brooks said.

At the beginning of the process, Brooks explored the Jackson School of Geosciences for inspiration. As he toured the facilities, he realized geological material resembled sculpture. Along with the physical nature of core samples, he drew inspiration from Texas oil culture.

“As a Northerner. when I think of Texas — for better or for worse — I think of oil,” Brooks said. “I wanted to think about another way to build relationships to an industry that is very much a part of our lives and also very much a destructive one.”

In addition to the 70-foot sculpture, Brooks published photographs of articles in pamphlets given to visitors. The articles he and a team of UT students came across were used by field workers to date sediments. By placing a daily newspaper with the core sample, the samples were chronologically archived. The articles cover everything from national events, like the Red Scare, to old advertisements indicative of the era.

“It takes a serious team to do these kinds of projects, and everyone involved had an enthusiastic spirit about them, and I think the project succeeded with a perfection only possible with this kind of community spirit,” Brooks said.

A little over a year ago, Jade Walker, the director of the Visual Arts Center, asked Brooks to be an artist-in-residence at UT.

“David is a perfect fit for this project as his artistic practice spans disciplines and in a collaborative nature,” Walker said.