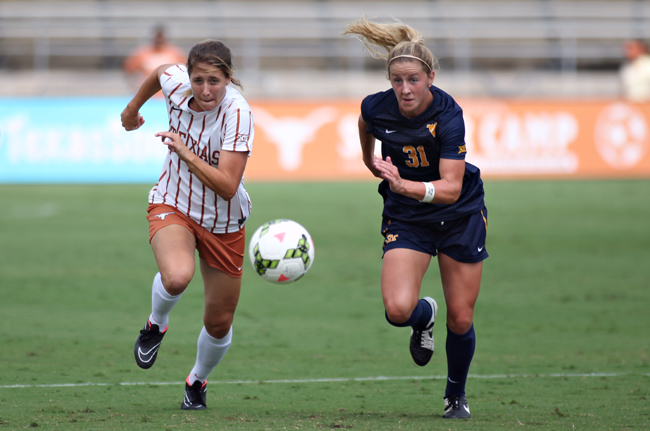 Texas cross country faced its longest race so far at the Roy Griak Invitational in Minnesota this weekend, where the 8K and 6K races showed both the men and women, respectively, that there is room for improvement. The men’s team placed all five scoring runners in the top 90 out of 300, while the women struggled early to run as a team.

It wasn’t a struggle for everyone, however, as senior Craig Lutz led the men’s race from the start, only relinquishing the lead to two other runners throughout the race. He surged back to cross the line at second place, less than two seconds behind the individual champ, Nate Jewkes of Southern Utah.

Fellow senior Mark Pinales kept up with Lutz for the majority of the race, slipping toward the end to a finish in 10th-place.

The women’s team broke apart early, leaving some runners to fend for themselves in the pack, which ultimately resulted in their 22nd-place finish, led again by sophomore Sandie Raines, who finished up at 69th place.

The Longhorns now have a three-week hiatus before heading to Terre Haute, Indiana, on Oct. 18 for the NCAA Pre-National Invitational — the same course the Longhorns hope to return to for the NCAA Championships.

Junior Michael Riechmann, the only Longhorn who competed over the weekend, fell to freshman Skander Mansouri of Wake Forest (7-5, 6-1) in the opening round of the pre-qualifying draw.

Sophomore George Goldhoff, senior Adrien Berkowicz and junior Nick Naumann will begin competition in the qualifying draw Monday. All three players enter competition ranked, with Goldhoff leading the way at No. 56 and Berkowicz and Naumann following at No. 106 and No. 113, respectively.

Hess-Olesen is currently ranked at No. 5 in singles, and Glasspool is ranked at No. 31. As a doubles team, they are ranked No. 4.

Play began Saturday and will continue through Oct. 6.

Both keepers played brilliantly in Friday’s game to keep it scoreless in regulation. Texas junior keeper Abby Smith blocked a handful of close-range rockets, and Red Raider sophomore keeper Lauren Watson, flashed some acrobatic skills  to keep Texas off the scoreboard through the first 90 minutes.

Texas finally hit the back of the net seven minutes into overtime. Freshman forward Olivia Brook received a pass at the top of the box, turned and floated a left-footer over Watson and into the top left corner of the net for a golden goal.

“I just think that we talked about it at halftime, and we decided we just need to go for it, and we need to take more shots and take advantage of every opportunity,” Brook said. “I think we did that.”

Texas struggled out of the gate in its Sunday contest against WVU, but it held the Mountaineers scoreless until a 10-yard shot in the 43rd minute by junior forward Kelsie Maloney deflected off a Texas defender into the net.

A goal from sophomore forward Ashley Lawrence in the 62nd minute sealed the win for WVU.

Texas will continue conference play with a road contest against Iowa State on Friday at 7 p.m.

Foster and Wagland posted an 8-6 win over Houston’s Elena Kordolaimi and Despoina Vogasari, before winning their second match Sunday against Northwestern’s Lok Sze Leung and Manon Peri for a berth in the qualifying rounds.