CEO of GE discusses leadership in on campus talk 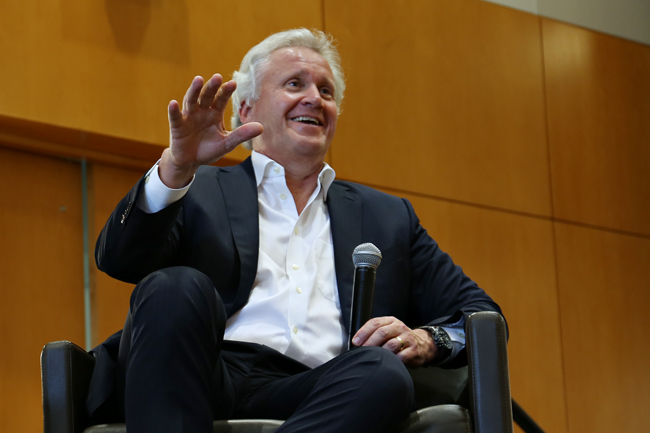 Jeffrey R. Immelt, the CEO of General Electric Corporation, spoke Monday about leadership and lessons he has learned in his own career as an executive of a Fortune 10 firm.

The speech was a part of the VIP Distinguished Speaker Series coordinated by the Undergraduate Business Council in the McCombs School of Business. Immelt has served as the ninth chairman of GE since 2001 and has been named one of the “World’s Best CEOs” three times by Barron’s and has been serving as the chair of President Obama’s Council on Jobs and Competitiveness.

Thomas Gilligan, dean of the McCombs School of Business, interviewed Immelt for 30 minutes in the Student Activity Center Ballroom before giving students the opportunity to ask questions.

The talk began with a question posed from last week’s VIP speaker, Charles Holley, Wal-Mart chief financial officer, who asked what the next big consumer innovation for GE is.

“In GE meetings, people’s ears perk up whenever someone talks about health care because not everyone identifies with a diesel locomotive or a jet engine, but everybody identifies with health care,” Immelt said. “I always think one of the neatest things we’re working on is the ability to study the brain and maybe in our lifetime have an impact on diseases like Alzheimer’s disease or Parkinson’s.”

The Undergraduate Business Council’s VIP Distinguished Speaker Series brings major company executives to campus each year. Past speakers include the CEOs of companies such as eBay, American Express and PepsiCo.

“We have one of the best speaker programs in the nation, next to the graduate program at Stanford, and I think it’s really cool that students get the opportunity to ask questions directly to one of the most influential men in the world,” said Matt Minner, business junior and internal controls director of the Undergraduate Business Council.

During the talk, Immelt said good leaders need to be both self-aware and self-confident.

“Ultimately, the best leaders are their own worst critics,” Immelt said. “I go to bed every night being critical of myself saying, ‘Oh my God, I could have done so many things better, I’m terrible,’ and I wake up in the morning and say ‘Hello, handsome, let’s go!’”