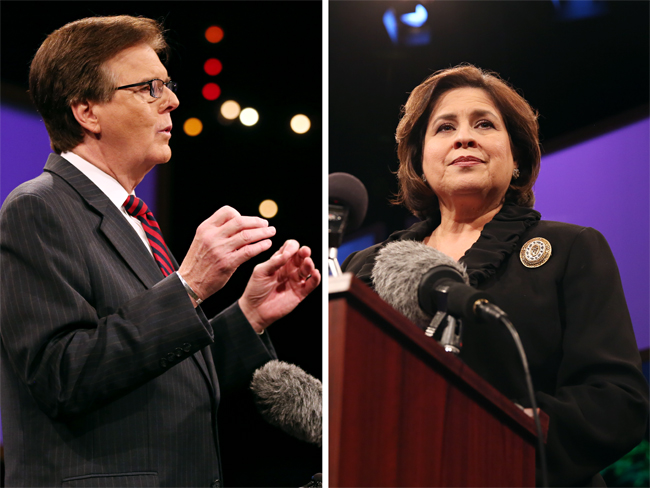 “I was appalled to learn that the governor had instilled a process for our Texas Enterprise Fund that had no accountability,” Van de Putte said. “When it comes to government programs, it shouldn’t be about who you know; it should be what you know.”

“I‘ll leave that to the next governor, but I took that position with the latest audit report,” Patrick said. “The best thing we can do is eliminate the business tax and lower property taxes. The real attraction of Texas is our economic opportunities, which are second to none.”

“This is about what you pay at the registrar’s office,” Van de Putte said. “Hardworking students who have the chance to pay the same should be given that chance. The jobs of the future are going to require a post-high school something. A one-time investment could change a generation.”

Patrick said he took issue with the in-state tuition bill because it raised questions of “fairness.”

“If they live in Oklahoma, and they want to go to any of our schools, why should they have to pay dramatically more than a non-citizen?” Patrick said. “I empathize with those students who have done good jobs and were brought here not on their own, but it’s a question of fairness, and it goes to the heart of why we need was to pass legal
immigration reform.”

Van de Putte agreed with Patrick that the border should be secured, but she said that local law enforcement needed to be more involved.

“We need to make sure our citizens are protected, and we need to listen and respect those local leaders,” Van de Putte said. “I would make sure our local law enforcement officers have the tools and personnel they need to get the job done.”

“I don’t know why my opponent has refused to disclose his taxes,” Van de Putte said. “So, I ask you tonight, Dan, will you disclose your taxes as everyone else has? And, if not, Texans can ask the question, Dan, what are you hiding?”

Patrick said he has been open about his financial situation.

“We filed a financial disclosure form every year,” Patrick said. “My form last year was 168 pages, which lists every stock I own, everything about me you would like to know.”

Patrick also discussed his plan to lower the state’s property tax and instead increase the state’s sales tax. Van de Putte criticized the plan, saying it would hurt city and county governments.

The candidates are not scheduled to debate again before election day. While Van de Putte originally proposed five debates, Patrick only agreed to Monday’s debate in Austin. Speaking with reporters after the debate, Patrick said he did not think that having only one debate was a problem for the voters because additional debates would not give more answers.